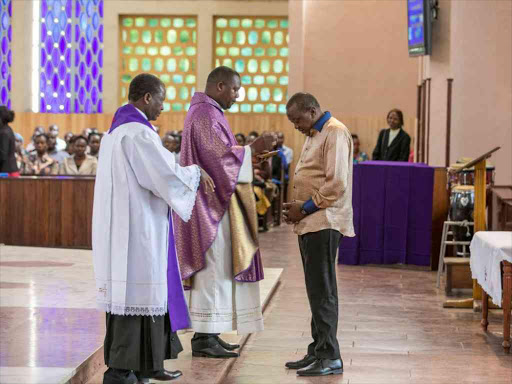 President Uhuru at Holy Family Basilica in Nairobi when the beginning of the Christian period of fasting, reflection and prayers began on February 14, 2018. /PSCU

Controller of Budget report to be released this week reveals the Presidency squandered Sh174m on travel and hospitality in just 90 days while KDF gobbled up Sh24billion in 3 months.

President Uhuru Kenyatta and Deputy President William Ruto squandered up to Sh174.7million in 90 days on domestic travels during the campaign period, a report by the Controller of Budget reveals.

In the same period, the national spy agency — the National Intelligence Service — spent a staggering Sh3.7 billion in mystery expenditure suspected to have links to partisan politics.

The spending comprises recurrent expenditure such as staff emoluments nearly doubled from the previous year, a clear indication that the agency either stepped up surveillance in the lead-up to the election or was a conduit for funding political activities.

In 2016, the Phillip Kameru-led agency had spent Sh6.5 billion, the report shows. But it gobbled up an extra Sh3.7 billion between July and September last year, blowing the bill up to beyond Sh10 billion.

The military is also on the spot, having spent a whopping Sh24.4 billion in just three months. While the amount also includes remuneration and allowances for soldiers, analysis of the report shows an increment of Sh5.1 billion, up from the Sh19.3 billion spent during the same period in 2016.

The military was not actively involved in preparations for the polls — which were budgeted for separately under the Independent Electoral and Boundaries Commission to the tune of Sh19 billion.

Interior, which is in charge of the Police and coordination of the national government administration, had spent Sh13.5 billion in 2016, but the expenditure shot up to Sh14.8 billion last year reflecting heightened activities prior to and after the controversial August 8 polls.

The ministry, which has often been singled out by Auditor-General Edward Ouko for unaccountable expenditures, spent Sh7 million on foreign travel and Sh102.2 million in rent for offices countrywide.

At the Presidency, there is an abnormal curve in the recurrent expenditures for the office, which spent a paltry Sh78 million during the same quarter in 2016.

The Sh96 million upward adjustments in expenditures indicate the massive resources deployed by the President and his deputy in the country’s most expensive campaigns.

The monumental Sh167.8 million on flowers, tea and snacks to entertain guests in offices, up from the Sh104 million pumped into hospitality in 2016, is noteworthy.

The two notable expenditures pushed the total amount spent by the Presidency in the first quarter of the 2017/18 fiscal years to Sh1.4 billion, up from the Sh1 billion spent in the same period the previous year.

According to the report by Agnes Odhiambo, the Presidency spent Sh20.5 million to maintain State limousines assigned to the offices of the President and Deputy President. This was, however, lower compared to the Sh49.3 million spent during the same time in 2016. The reduction could be attributable to the fact that the Jubilee candidates were barred from using State vehicles during the campaigns.

The expenditures soared up with the September 1 nullification of the August 8 Presidential election by the Supreme Court, which forced candidates back on the campaign trail.

During the campaigns, Jubilee Party, which sponsored Uhuru and Ruto, put up a multi-faceted campaign that involved the use of helicopters, high-end four-wheel- drive vehicles and diverse branding merchandise.

The President often flew in the taxpayers-fuelled military chopper and three other helicopters that carried his entourage and security.

Uhuru was often accompanied by a coterie of public servants, including political advisers and members of the national administration who were booked in hotels and given facilitation allowances.

The DP, too, had his convoys that scoured villages for votes, flying private and police choppers sometimes fuelled by the taxpayer.

State facilitation of the Jubilee campaign drew the High Court’s sanction after the Katiba Institute petitioned against the use of public resources to advertise Jubilee achievements.

The Opposition also accused Uhuru and Ruto of deploying State resources to canvass for votes, contrary to the Elections Act and Code of Conduct.

“We have seen a worrying inability of the IEBC to enforce the Electoral Code of Conduct. We have seen the government using its record in office and public funded projects as campaign tools for Nairobi. We have seen Cabinet Secretaries and Principal Secretaries, who are paid by taxpayers, deployed to campaign for Jubilee Party,” NASA leader Raila Odinga complained in July last year.

However, Uhuru denied the claims.

The State-funded Kenyan National Commission on Human Rights also expressed concern then that the government was using public resources to campaign.

KNCHR chairperson Kagwiria Mbogori accused the government of sponsoring and running adverts in both electronic and print media as part of the campaigns.

“Those actions of the government amount to abuse of office and thus Kenyans must call for transparency and accountability of the public officers who unlawfully disregard legal provisions aimed at safeguarding free and fair elections,” Mbogori said in a press statement.