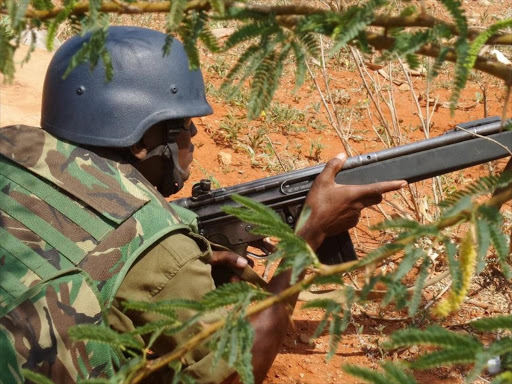 A file photo of a Kenyan soldier in Somalia.

Two Kenyans have been executed by al Shabaab fighters

Hassan Yussuf and Mohamed Hassan from Marsabit county were executed by dagger-wielding militants on February 12.

the militia forcefully gathered locals to witness the killings which they had announced earlier on Saturday using vehicle-mounted loudspeakers.

The locals in the area have witnessed regular executions carried out by the al Qaeda-linked terror group.

The terrorists kill those found guilty

The foreign al Shabaab fighters, mainly from Kenya, have witnessed rampant executions by the group who accuse them of being moles.

So far, more than 20 Kenyans have been executed.

The group confirmed the executions which took place after the men were found guilty by an al Shabaab court in Jamame district of Lower Jubba region, some 70 km (43 miles) north of Kismayu.

Al Shabaab fighters have carried out many attacks in Kenya in retaliation to the contribution of Kenya Defence Forces soldiers to the African Union Mission in Somalia.

Post a comment
WATCH: The latest videos from the Star
by NANCY AGUTU, @NancyAgutu
News
14 February 2018 - 12:00
Read The E-Paper