Miguna’s days in police cells were full of drama and insults, say cops 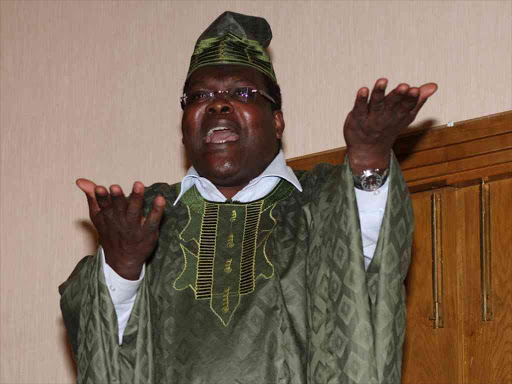 Former adviser to the Prime Minister Miguna Miguna during the launch of his book "Peeling back the mask-A quest for justice in Kenya" on Saturday 14th, July 2012. Photo/ Jack Owuor

Self-proclaimed NRM ‘General’ Miguna Miguna’s four nights in police custody were full of drama, for both the police and himself.

He refused to be cowed by the police and used his gift of the gab to engage security officers in heated and at times hilarious arguments. Miguna, who is known for his fierce criticism, did not take it easy on officers from the elite Flying Squad, who had to endure the wrath of his razor-sharp tongue.

Officers from Githunguri and Lari police stations, where he spent much of his time, had a rough time dealing with Miguna, who is also a lawyer. At one time on Monday at dawn, the officer commanding Lari police station had to call his superiors to seek guidance after Miguna declined to return to his cells.

Miguna had called the officer on duty at 4.30am. He wanted to visit the loo. And when he was allowed to, he declined to return to the cells and started shouting. Junior officers called the station commander, who after consultations gave instructions he should be allowed to hang around the corridors.

Officers from the Nairobi Flying Squad arrived at the station in two Subaru vehicles the same morning, picked him up and headed to Nairobi. Miguna could not hide his displeasure and even went ahead to insult the officers. “He used foul language, but we had to remain calm,” one officers at the centre of the drama said.

Not even the high-calibre AK-47s the police officers carried were enough to make Miguna shut up. Occasionally, he hurled insults at the officers who were escorting him around the city. “Is this your first time to see an aircraft?” Miguna asked one of the officers.

The officer, known to be a no-nonsense cop, was boiling with rage, but had to maintain his cool even as Miguna continued spewing insults. Yesterday, the officers recounted how Miguna was calm as they escorted him to Githunguri police station. He told the officers he was feeling thirsty and needed water and a soda.

One of the cops volunteered to buy Miguna a bottle of soda and water. Miguna, who at the time was calm and collected, had a friendly chat with the officers. He told the cops when he worked as an adviser to former Prime Minister Raila Odinga he had advised the government to improve conditions in police stations and cells.

Both the officers and Miguna laughed and the cops jokingly told him he would soon confirm if his advice had been taken seriously.

As he would later discover, nothing much had changed and he had to spend the night on a cold floor. The toilets were in pathetic condition and suspects relieved themselves in a bucket, which is emptied the following morning. For the entire period, Miguna did not shower or brush his teeth.

Miguna, in an interview with BBC, said he was treated like a beast. Speaking at Amsterdam Airport yesterday, he said, “I’m going to Canada, which I know stands for the highest standards of human rights. I have been treated so badly like a beast. I was not allowed to sleep, kept standing on a bare cement cold floor.”

The lawyer was deported to Canada on Tuesday night for his role in the administration of NASA leader Raila Odinga’s oath. Miguna stamped the documents after Raila was declared the ‘People’s President’.