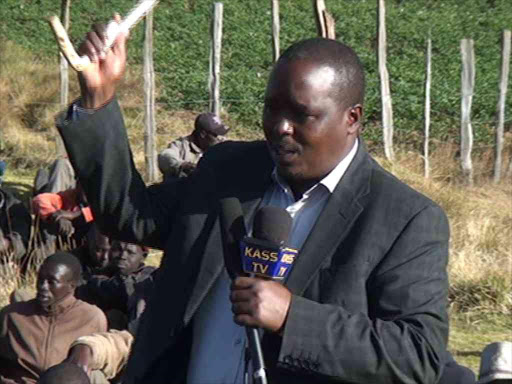 Tolgos noted on Wednesday that the 65,000-hectare Cherangany water tower and the 21,000-hectare Embobut Forest are owned and conserved by clans.

He asked KFS to involve residents in conservation to end animosity with the service.

KFS kicked off eviction of illegal dwellers, including members of the indigenous Sengwer community, in December last year.

Tolgos added some KFS wardens were harassing locals in the forest instead of seeking ways to incorporate them in its management and conservation.

“Locals have stated that they are being harassed by wardens but we have asked them to continue conserving forests. There will be no need to deploy wardens if they play their role."

The county chief warned charcoal burners and others who cut trees against the illegal practices.

“Some of the charcoal burners are cutting 300-year-old indigenous tree species,” he said.

The animosity is partly due to claims that it has been seizing livestock.

The Sengwer community, through their spokesman Paul Kiptuka, alleged that KFS wardens evicting illegal settlers seized five sheep in Tangul area inside the forest on Tuesday.

“We have reported the matter to police but they have declined to allow us to record a statement,” Kiptuka said, adding they did not know where the animals were.

“We also asked KFS wardens in Tangul to explain why they took our sheep but they said the animals were illegally grazing in the forest.”

Elgeyo Marakwet senator Kipchumba Murkomen reprimanded wardens in Kamelei near the forest on Friday, saying it was wrong for the service to deny locals an opportunity to graze their livestock in the forest.

“We had a meeting attended by the president [Uhuru Kenyatta] in this area and agreed that people move out of the forest. Never did we say grazing is not allowed,” Murkomen said.

KFS North Rift conservator Stephen Chesa noted it is illegal to graze animals in a gazetted forest without a permit from the service.

He said this is regulated and that farmers pay Sh100 for each animal to graze in the forest for a month.