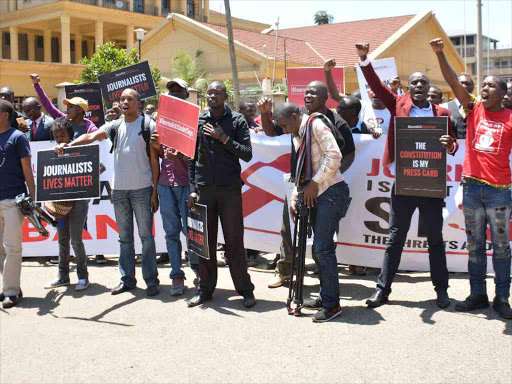 A file photo of journalists during a demonstration against harassment and killings.

Led by Kenya Human Rights Commission and the International Commission of Jurists, they noted the government must uphold the spirit of constitutionalism.

'Not in my country'

will begin on Monday, the goal being to stand up to the government and ensure it respects all institutions that serve the people.

Mue emphasised that civil societies are not going to throw their hands in the air and let Kenya plunge into authoritarianism.

"This country is not going to stand for the switching off of TV stations, denying us our right to information. This is not a favour granted by the government, any minister or communications authority, but a right protected by constitution," said the transitional justice expert.

He added the Jubilee Party regime is taking the country back to one-party dictatorship as evidenced by events following Nasa leader Raila Odinga's self-oath on January 30.

The activist said persistent aggression against opposition leaders shows the government is "simply afraid of a revolution".

"We cannot stand for a state that arrests and abducts its citizens using violence. This is clearly a rogue state acting like a criminal enterprise. It has suspended the constitution and is slowly introducing a state of emergency," he said.

Mue further said that the manner in which police officers are raiding the homes of opposition leaders, "to the extent of breaking down their doors, must be condemned in the strongest terms possible".

He addressed a press conference in Nairobi on Friday.

His sentiments were echoed by George Kegoro who said it was "pure madness" for the government to shutdown three major stations - NTV, KTN and Citizen.

Kegoro further chided the government for ignoring court orders that suspended the shutdown, noting it cannot expect citizens to be obedient.

"The court had given this government a face-saving way out of the hole it dug itself into but it has chosen to ignore the same by giving lame excuses as to why the stations had be put off."

The Communications Authority on Friday blocked activist Okiya Omtatah from serving them with court orders lifting the shutdown on media houses.

Omtatah told The Star he was blocked outside the authority's gate on Friday.

Earlier yesterday, a section of civil societies and journalists demanded reopen the stations and

vowed to sue individuals behind the orders.