Kibera NASA supporters angered after cops fail to tear-gas them 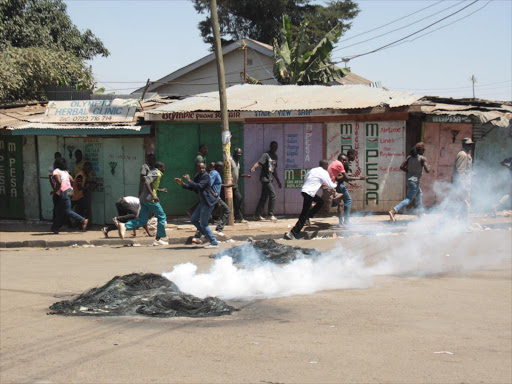 Police on Thursday disappointed "NASA supporters" in Kibera by failing to turn up and use teargas to disperse them.

Hundreds of the opposition supporters protesting the arrest of lawyer Miguna Miguna expressed disgust at police's cowardice and "conspicuously missing in action".

The rioters gathered at the Olympic stage where they lit bonfires and barricaded the main road stoning motorists immediately after getting news of Miguna's arrest, in anticipation of a confrontation with police.

They demanded to be teargassed but cops didn't turn up.

Motorists were forced to use alternative routes to evade the irate demonstrators who dared police for a fight.

PSVs made U-turns at the Toi market keeping off the entire stretch to Ayany.

Miguna, a self-declared "general" of the National Resistance Movement was arrested in a spectacular dawn raid at his Runda home sparking opposition supporters' protests.

Hundreds of the heartbroken rioters decided to walk to the Southern By-pass after learning police had used teargas to disperse another group that had blockaded the road to rob motorists, mainly cargo trucks.

But local leaders intervened and implored on them to remain at the Olympic stage where they had camped since morning.

The demonstrators teargassed themselves after police chose not to interrupt their protests.

"Most are goons who want to cause chaos to loot as police chase after them. They thrive on stealing during commotions and that is why they are bored by police's absence," a resident told the told the Star at an informal school.

"It would have been worse if police confronted them because they [goons] would have scored, getting an opportunity to loot." Most businesses including banks remained open with a little interruption on suspicion of police's arrival.

The demonstrators on the by-pass had barricaded the section between Lang'ata and Ngong roads to loot from motorists but police arrived in haste and dispersed them, and opened up the road.

But police remained vigil along the road and used teargas to disperse the goons attempting to regroup and return to the road.