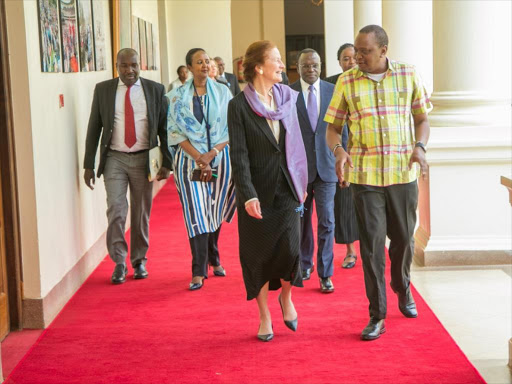 ODM has disputed the appointment of President Uhuru Kenyatta as

Executive director Oduor Ong'wen wrote to the UN body asking them to "revoke the decision and apologise to Kenyans".

"We urge your office to keenly review and rescind

this appointment and offer an apology to the many families in Kenya."

"...families whose children were physically and sexually assaulted and the millions of young unemployed Kenyans

chocking under the heavy weight of official government

role as the global champion will entail advocating the promotion of universal healthcare, education and nutrition.

But in a statement on Tuesday,

Ong'wen said the appointment is in bad faith.

"We reject this appointment

that is a travesty of an organisation that prides itself as the champion of children rights across 190 countries and territories," he said.

through the appointment, UNICEF has

assault on women and girls, the physical

violence on all children and worst the killing of children during the last elections.

During the elections, a

six-month-old infant died from a head fracture after she was reportedly clubbed by police officers who raided their home during post-election protests on August 11.

"UNICEF has legitimised government corruption and wanton looting of the public fund on programmes conjured up as youth empowerment projects,"

"We are shocked at this offer and wish to register our indignation to you."

During her visit to Kenya, the

assured the country of support in achieving universal healthcare.

commended Uhuru for the "Big Four Agenda", terming it a well-thought-out plan that would project Kenya as a model in the region especially in the provision of healthcare to children.

But after the appointment, the UN spokesman

Stephane Dujarric said he has no idea that Uhuru was appointed as a youth champion.

Dujarric said: "...the director spoke about the need for youth to be engaged and the president said he will support that but beyond that, I am not sure of any appointment."

as the global champion for youth empowerment.

Under #shamefulUNICEF, those opposed to the move expressed their displeasure saying global bodies need to relook at their choice of some ambassadors.

has almost always goofed on the appointment of so the called ambassadors. It was Mugabe just before his downfall and now

@AmedoShair said "that UNICEF has appointed Uhuru the global champion for youth empowerment.

me of the WHO appointing Mugabe."