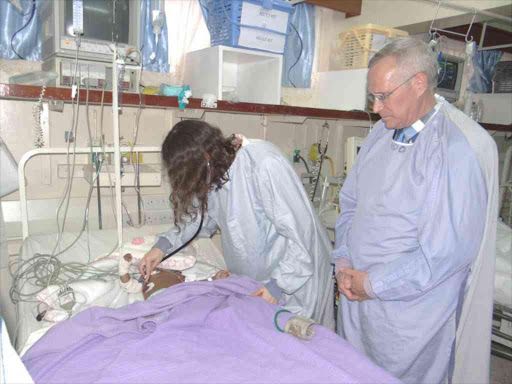 A child died while four others were admitted in critical condition after receiving measles vaccines in Bomet county.

The immunisation was administered at Mogogosiek heath centre, which is a facility run by the county government.

The children's bodies got swollen after the exercise on Tuesday so they were rushed to Tenwek Mission Hospital.

The babies aged between nine and 12 months were taken to the intensive care and high dependency units.

Speaking to the press at the hospital, Simon Kirui, whose child died, questioned the safety of the vaccine and the qualifications of the staff that administered it.

Noting his baby was healthy before the immunisation, Kirui asked the government to investigate the matter.

“We sought a routine vaccination from a government facility and it resulted in the loss of our beloved child. We now hold the government liable since the facility is run by the county. They claim the vaccines were supplied by KEMSA,” he said in Konoin.

“The swelling was obviously from a reaction to the measles vaccine administered at the facility."

The official called for calm and asked parents to keep taking their children for immunisation.

The hospital’s deputy nursing officer said the children were out of danger.

"The children admitted at our facility are out of danger. Doctors are monitoring the situation very closely,” Paul Too said.

Kapkatet County Referral Hospital in Kericho received a good number of children who were immunised at Mogogosiek after reports of the death.

Barchok said they stopped the administration of vaccines at all facilities in the county.

But he dismissed allegations of negligence by health workers at Mogogosiek, saying those who vaccinated the children were experienced.