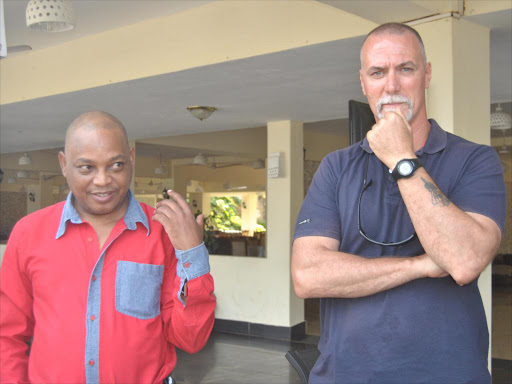 A showdown is looming as owners of the Sh1 billion Temple Point Resort in Watamu want to officially reclaim the property on Wednesday.

Isaac Rodrot and Italian Stefano Uccelli were granted court orders to take back the property being run by a German investor.

The hoteliers said on Sunday that they had followed all legal processes to take over from Hans Jurgen Langer.

However, it has emerged that the hand over may not be that smooth despite the order that the hotel belongs to Rodrot and Uccelli.

The row over the hotel's ownership has lasted over seven years in the face of many court cases as each party lays claim to the property.

Rodrot and Uccelli told journalists on Sunday that they have intelligence the current holders are planning to use goons to block them from accessing the hotel.

The duo said they had served the parties' lawyers with all required documents ahead of the official handing over.

"The court order was very clear and was delivered by a senior judge who said Langer acquired the hotel fraudulently," Uccelli said.

On January 4, the Malindi High Court directed that the rulings, one issued by the Court of Appeal and the one delivered on April 30, 2015, be enforced.

Further, the two investors had on January 5 informed the German parties of the intended take over January 10 saying they will be accompanied by security officers.

"Take notice that our clients, accompanied by security agents, will be taking possession of all properties belonging to Salama Beach Hotel," the letter addressed to Ndegwa Kiarie and Co Advocates reads in part.

Ucceli said the current management tried to block them from accessing the property owing to the change of name from Salama Beach to Temple Point.

"The hotel was originally traded as Salama Beach but Langer registered a company called Temple Point," he said.

"We are facing resistance from entering the hotel, they want to use the power of goons and a former MCA."

Rodrot said the Court of Appeal judgement delivered on December 15 clearly allowed them to take over the hotel.

"We cannot interfere with the hotel name, clients and workers and expect the handover process to be smooth."

He said that once they take over, they will continue running the hotel until April, after which it will be renovated so it meets standards.

On December 25, the current management dismissed claims that the hotel would be run by new directors.

Ian Langer, an assistant director, said the hotel remained their property and was still in operation.

He said those who claimed to be planning to take over the resort were misleading clients.