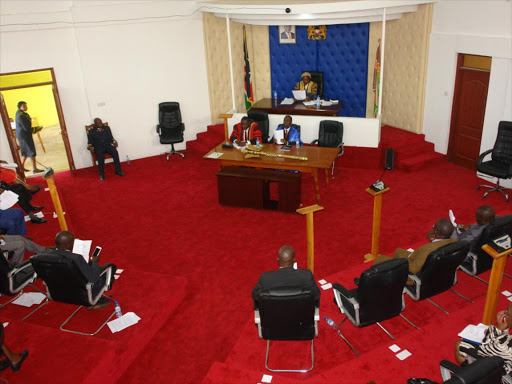 Speakers remain the highest paid county assembly officials following the new policies and guidelines on perks released by the SRC.

Leboo Saisa, Kajiado county assembly legal advisor, on Thursday said a speaker is also housed by the assembly and provided with utilities like furnishing and house attendants.

He said this will be a departure from the situation where MCAs created more sittings to make more pay.

This was before the Salaries and Remuneration Commission set new conditions on how the assemblies should conduct their businesses in a bid to cut perks.

At the Kajiado county assembly, the least committees an MCA can sit in are two, while the most is five. They are paid between Sh3,000 and Sh5,000 per sitting.

Records show that an MCA is allowed a maximum of 16 sittings in house committees per month.

Chairmen of such committees (17) committees earn a flat rate of Sh80,000 per month, while ordinary members get Sh48, 000 for the same before tax.

MCAs, according to guidelines provided by the SRC, do not get sitting allowances for normal House plenary sittings but get a flat salary of Sh144, 375 per month.

A deputy speaker earns Sh216, 563 whereas other perks for MCAs include a Sh3 million mortgage serviced at 3 per cent interest

for a period of years served.

MCAs, according to records at the assembly, are entitled to Sh200,000 for Outpatient treatment and Sh3 million for In-patient services.

Female MCA get Sh100,000 for maternity when they give birth while serving. All MCAs qualify for Sh50, 000 dental treatment and Sh50,000 for optical services.

Gratuity for all the elected and nominated MCAs and speaker is calculated at 31 per cent of their basic salary.

All MCAs, however get airtime allowance of Sh5,000, while the speaker gets Sh10,000 per month.