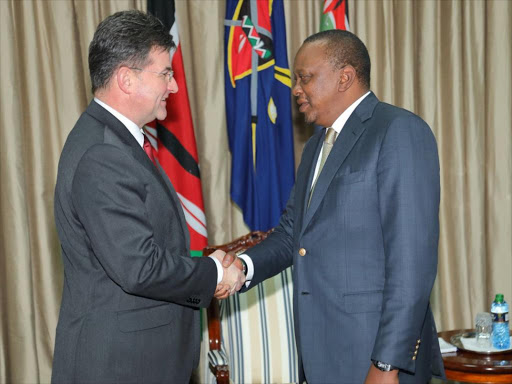 At the meeting at State House, Nairobi, Uhuru requested the President of the 72nd Session of UNGA to use his networks to help in the consolidation of UNEP and UN-Habitat headquarter functions in Nairobi.

“This will support the strengthening of UNEP and UN-Habitat in Nairobi,” President Kenyatta said during the meeting with Mr Lajčák who is in the country to attend the third session of the United Nations Environment Assembly (UNEA), which officially opens tomorrow.

Lajčák assured President Kenyatta that during his tenure – as the President of 72nd Session – he will give the required support to bolster the UN office in Nairobi.

They also discussed the ongoing reforms in of the UN under the ‘Secretary General’s Global Service Delivery Model (GSDM)’, where Uhuru rooted for Nairobi to be picked to host the UN’s service centre for the region.

The meeting, attended by Head of Public Service Joseph Kinyua and Foreign Affairs CS Amina Mohamed, also focused on peace building in Africa where Uhuru urged the UN to scale up its allocation of resources to peace building missions in the continent.

Over 4,000 Heads of State, Ministers, business leaders, civil society representatives and UN officials – including Lajčák – have gathered at the three-day UN Environment Assembly in Nairobi to tackle the global menace of pollution as well as other issues relating to environmental conservation.