Are leases in Laikipia about to start expiring? 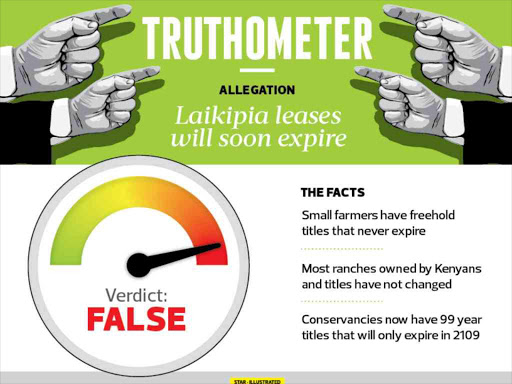 "The conservancies in Laikipia formerly held 999 year leases but these are now being reduced to 99 year leases." /THE STAR

Former Laikipia North MP Matthew Lempurkel has argued publicly and in court that colonial leases are now expiring in Laikipia. He claims powerful people are conspiring to grab the expired leases and pastoralists are just trying to recover their ancestral land before it is stolen again.

No leases are about to expire in Laikipia.

Smallholder farmers on settlement schemes have freehold titles that never expire. They have security of tenure despite having been invaded during 2017.

Article 65 (1) of the Constitution provides that a person who is not a Kenyan citizen shall only hold a leasehold interest in land for a term not exceeding 99 years. Any lease longer than that was automatically converted to a 99 year lease if it was held by a non-citizen.

Freehold titles held by foreigners were formally converted into 99 year leases under the terms of the 2010 Land Registration Act.

Draft land regulations from the Ministry of Lands state that the effective starting date for the new 99 year leases is 27 August 2010. Therefore freehold titles formerly held by foreigners and now converted to leasehold titles will not expire until 2109.

Most of the ranches in Northern Kenya are owned by Kenyan citizens, including those of European extraction, and they are therefore unaffected by the 2010 Land Registration Act. If they hold Freehold title deeds or 999 year leases, those were both preserved by the Constitution. Therefore no freehold title or lease will expire on most of the ranches in Laikipia or northern Kenya in the foreseeable future..

The conservancies in Laikipia formerly held 999 year leases but these are now being reduced to 99 year leases, if they are not Kenyan owned, and they will expire in 2109.

There is another small batch of 99-year leases issues by the colonial government in the 1950s called Temporary Occupation Licences (TOLS), a government system that applied in remote parts of Kenya. These 99 year leases will only expire after 2050. If Kenyans own those leases, they will be automatically renewed by government.

The underlying owner of all leasehold land in Kenya – whether in Nairobi, Laikipia or the Coast – is the Republic of Kenya. Therefore no leasehold land would revert to any ancestral community, if and when a lease might expire.

In summary, the rhetoric about the imminent expiry of leases in Laikipia is false.