No sword for Uhuru at Tuesday's swearing-in 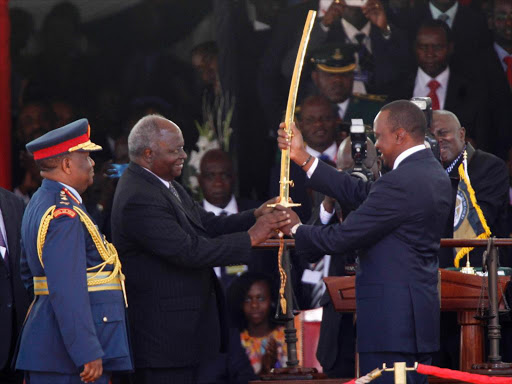 President Uhuru Kenyatta (R) receives a special sword representing the instruments of his power and authority from his predecessor Mwai Kibaki (L) as Gen Julius Karangi looks on after his official swearing-in ceremony at Kasarani Stadium in the capital Nairobi, April 9, 2013. /REUTERS

President Uhuru Kenyatta will not be presented with instruments of power when he is sworn in on Tuesday at Kasarani for his second term.

This is per Section 14(2) of the Assumption of the Office of President Act which does not require an incumbent president to receive a sword and the Constitution.

This is because the handing over of the instruments of power under Section 14(1) happens when one President is leaving the office for a new one.

According to Section 13 of the Act, the oath or affirmation shall be administered by the Chief Registrar before the Chief Justice or the Deputy Chief Justice, not earlier than 10.00 am and not later than 2.00 pm.

"Upon taking or subscribing to the oath or affirmation under subsection (1), the President shall sign a certificate of

Yesterday, Uhuru's Chief of Staff and head of public service Joseph Kinyua gazetted a notification of the

as the Chair of the Assumption of the Office of the President Committee.

"The Assumption of the Office of the President Committee notifies the public that informed that the swearing-in ceremony of the President-Elect shall take place on Tuesday at the Moi International Sports Centre, Kasarani from

The government also declared November 28th as a national holiday to pave way for the swearing in.

"It is notified for the general information of the public that, in accordance with the provisions of section 12 (3) of the Assumption of the Office of the President Act, 2012, Tuesday, the 28th November, 2017, shall be a public holiday," Acting Interior CS Fred Matiang'i said.

Preparations are underway ahead of the event with the military

taken over Kasarani Stadium, the venue where the inauguration will take place.

expected to attend the event while at least 100,000 people will also witness.

The government had announced August 8 and October 26 as public holidays when the general and repeat elections were held respectively.