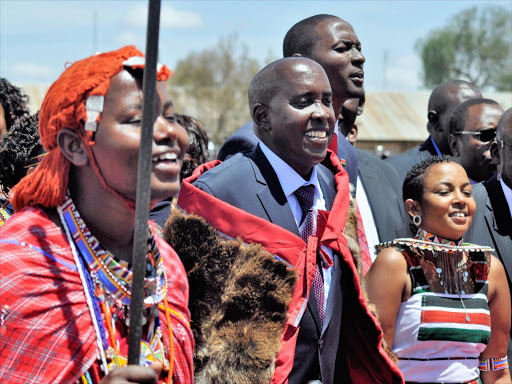 He said the East African leader's way of handling livestock which cross into the country for pasture amid biting drought in Kajiado is "shameful".

"This is indeed shameful for a leader of his stature to auction our livestock and yet we have hundreds of Tanzanian livestock grazing in our country."

"Why is he creating a wedge between our Maasai communities living in Tanzania and Kenya?" Lenku asked during an interview at his office on Tuesday.

Lenku said that while Kenya has continued to preach peace among the people living along the border, Magufuli is "busy demolishing bridges for unknown gains".

This was after Magufuli on Tuesday emphasised that his government will confiscate all livestock trespassing into the country from Kenya.

During a tour of Kagera province, he said: "Tanzania is not a livestock farm...we will take stern legal action for animals that cross into our country."

At the same time, the president advised a neigbouring country, which he did not name, to confiscate Tanzanian livestock that crosses into its territory illegally.

"We have decided to confiscate and take legal action against farmers whose livestock will trespass into our country," Magufuli said in a public rally.

The Tanzanian president's sentiments came in the wake of accusations that he has been frustrating Kenyan herders who cross over to graze their animals during drought.

Three week ago, The Star reported an incident in Arusha where Tanzanian authorities confiscated 1,305 heads of cattle and arrested ten Kenyans.

The arrested animals were auctioned before the herders were released by a court in Arusha after paying a TSh1 million fine each.

The lot was charged for being in the country without valid documents.

Lekarokia ole Nangoro, a Kenyan respected elder from Loitokitok, told the Star on Tuesday he was in Arusha when the ten Kenyans were released.

"All of them are back into the country safe. As we speak now, I am organising a fundraiser to pay off the money we were loaned to pay the court in Tanzania."

The proceeds from the public auction of the cows belonging to the Ilkisonko Maasai from Kajiado South constituency were handed over to the Tanzanian government.

The Kenyan herders had been given an option fine of a Tsh500 million by the Arusha court but failed to raise the money and the livestock were auctioned.

One week ago, Tanzanian authorities at the Namanga border confiscated 6,400 one day-old chicken chicks valued at Tsh12 million on allegations they had bird flu.

All the chicks were burned alive in the presence of Tanzanian police.

The owner of the chicks, a Tanzanian, was arrested and detained by authorities, according to Mwananchi Newspaper.

While speaking in Kagera, Magufuli instructed all the elected leaders to educate their electorates on the need to brand all their livestock.