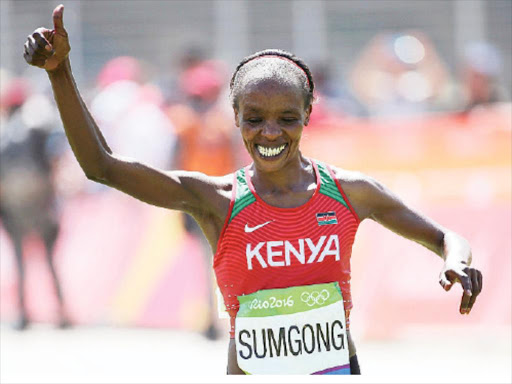 The athlete returned an adverse analytical finding (AAF) following the out of competition test conducted on February 28.

Documents seen by The Star showed that Sumgong's medical evidence was faked.

This followed the allegations that she received the EPO as part of treatment for an ectopic pregnancy.

The findings were adjudicated by the sports dispute tribunal (SDT) chaired by John Ohaga in conjunction with the anti-doping agency.

The hearing took place on October 18 before decision was announced on October 31.

The tribunal heard that Sumgong observed that she had undergone treatment at Kenyatta National Hospital on February 22.

It was here that she reportedly received a blood transfusion and unidentified treatment that she did not disclose to anyone including her husband Noah Talam.

The non-disclosure was due to the taboo associated with the condition (ectopic pregnancy).

She provided ADAK with time sheets.

But in a strange twist of events, KNH denied that she had been treated on February 22.

The hospital, however, confirmed that she did visit the facility on April 18 in regards to the ectopic pregnancy.

KNH added that EPO is not routinely used for ectopic pregnancy cases.

The facility added that all patients with that condition are admitted for at least four days.

The hospital further argued that ectopic pregnancy patients are issued with a discharge sheet detailing treatment.

Sumgong in her defence argued that the doctor who treated her could have been an imposter due to the doctor strike at the time.

ADAK rejected the application arguing the athlete, being a member of the Kenya Defence Forces, could have accessed the Armed Forces Memorial Hospital for treatment.

"The hospital is a short distance from KNH and no explanation was given for the athlete's decision to seek medical attention at KNH," the anti-doping team said.

"It was ADAK's position that the substance was being used for the preparation of the London Marathon."

The panel observed that Sumgong did not disclose her treatment on the doping control form (DCF) despite the alleged February treatment.

"Indeed, we might go as far as to state that the athlete's attempt to explain how the substance entered her body bordered on an attempt to deceive the panel."

The panel determined that Sumgong will serve a four year ban from April 3, 2017.

This is the date on which she was provisionally suspended by the International Association of Athletics Federations (IAAF).

This means that Sumgong is likely to lose her 2017 World Marathon Majors (WMM) title as stated by the organisers.

Under Article 13(2) of the World Anti-Doping Code, she has 21 days to appeal the decision.

This means that any appeal must be filed with the Court of Arbitration for Sport (CAS) by November 20.