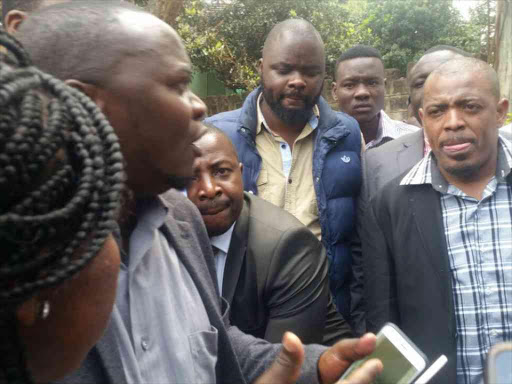 Citizen's Francis Gachuri was roughed up and threatened with a beating while an NTV videographer was slapped.

They were rescued by

journalists, some who walked out of the meeting

at the offices of Kalonzo Musyoka's party, to show their support.

The parliamentary group meeting was then called off.

Reports indicated the attack was motivated by Citizen's set up of a tallying centre for the presidential re-run that incumbent Uhuru Kenyatta won.

"I am under siege. The goons are now threatening to torch Citizen's observation van," Gachuri told The Star on phone during the incident.

He said journalists and media houses were being profiled.

he reported the matter to Raila Odinga as he was "not amused at all".

"I must say what I saw was unfortunate, barbaric and archaic," he said. "On behalf of NASA, I apologise for the attack on my brother Gachuri and on my sister Jane of NTV. I am very disturbed."

He said they will issue a statement on the matter and the youths involved will be reprimanded.

Raila, who is Opposition leader, warned politicians against "taking goodies" from the Jubilee administration.

Post a comment
WATCH: The latest videos from the Star
by MONICAH MWANGI @monicahmwangi
News
31 October 2017 - 12:00
Read The E-Paper