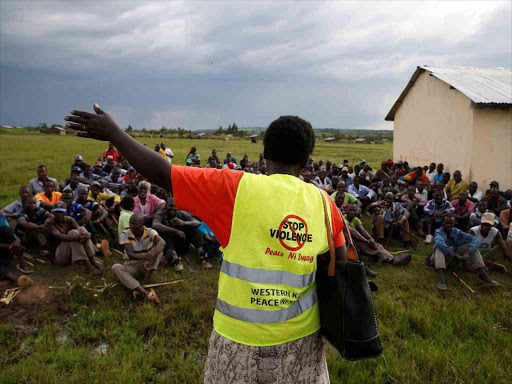 Kenya's repeat presidential election, boycotted this week by millions, has reignited long-running tensions between ethnic communities in some areas, leading inhabitants of one small village in the west to pick up traditional arms on Saturday.

In the bright green sugarcane fields where the western Nyanza region rolls toward the Nandi hills, two tribes - the Luo and the Kalenjin - have lived in relative peace for years.

But in the village of Koguta, down the road from the town of Mugoroni in Kisumu County, Thursday's polarising vote reignited old grievances.

The stand-off, defused by an emergency intervention of three county governors, was a stark reminder of how easily

Kenya's months-long political crisis could spark the type of ethnic violence that killed 1,200 people after a flawed 2007 vote.

On one side of Koguta are Kalenjins, here ardent supporters of President Uhuru

Kenyatta and his Kalenjin deputy, William Ruto. But the Luos across the road support opposition leader Raila Odinga, who called for a boycott of the vote because he said it would not be fair.

Some of the Luos here fought police to stop ballot boxes being delivered. The Luo accused the Kalenjin of stealing cattle and burning their sugarcane crop in revenge, prompting both sides to grab machetes, spears, bows and arrows, and wooden clubs.

"This is an area where they tried to come in with ballot boxes, there was serious resistance, so that was the genesis of all this enmity between the Kalenjins and the Luos," said Julius Genga, a county legislator, as a colleague stood atop a sports utility vehicle to calm a crowd of men with spears.

The opposition dismissed the vote as a "sham" although

Uhuru's supporters say it was legitimate. Protests stopped four counties from opening polling stations at all. Only a third of voters turned up, and the opposition is likely to challenge the poll in court.

"This has to do with politics," said Collins Owuor, 21, holding a machete. "Before politics we did not have problems with these people."

In the distance, where smoke rose from sugarcane fields, Reuters saw police speaking to spear-wielding Kalenjins, but the local police chief warned journalists away.

By the end of the afternoon's meetings, the cattle had been returned and officials said they hoped the risk of violence had been quelled.

Koguta is not the only place where simmering ethnic tensions have broken into the open.

On Friday night in the Nairobi slum of Kawangware, a man was beaten to death and homes and shop burned down amid rumours that a tribal militia had infiltrated the neighbourhood of a different tribe.

only faced six minor candidates, none of whom won more than one per cent in August, and that and the low turnout have quashed his hopes of securing a decisive mandate to lead east Africa's richest economy.

Uhuru's running mate, told CNN on Saturday he expected the final tally from the vote to be ready by Sunday:

"Shortly we will be having a declaration and finally a swearing in, in accordance with the constitution."

The election board said on Saturday it would soon announce a new plan for the nearly 30 of 290 constituencies that have not voted yet. The constitution says the vote must be held in every constituency.

More legal cases against the election are expected next week.

If the courts fail to find a path out of the crisis, including a possible order for another rerun, the protracted and economically damaging stalemate between the

and Raila camps is likely to continue.

The electoral saga is polarising the nation and slowing growth in what has been one of Africa’s most vibrant economies, which is also a regional trade hub and a security ally for Western nations.

"This is pure oppression," said Hassan Hussein, a Muslim community leader. "The law says if you want to vote, you vote, if not, you don't."