Lenku sees hand of God in Kajiado gas discovery, samples sent to US 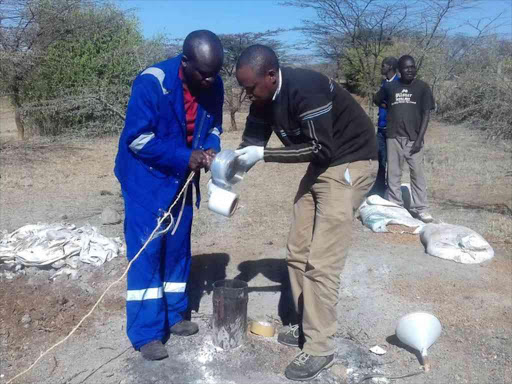 Governor Joseph ole Lenku's fingers are crossed as Kajiado has sent samples of accidentally discovered methane gas to the US for further analysis.

confirmed this when he spoke to the Star on phone on Saturday, following the discovery at

a private farm at Kipeto plateau.

"God is with us. We have crossed our fingers for heavens to open up," he said.

"For many years, our people have suffered under harsh climate conditions that have led to loss of livestock. I can't sleep because of what my people are undergoing with the drought."

The Governor said their prayer is that findings are positive and exploration smooth so the county can progress.

He asked speculators to keep off the area so government agencies involved in exploration can operate undisturbed.

Earlier in the week, National Oil announced it had contracted American oil and gas logistics giant Weatherford to analyse samples to allow drilling.

National Oil, which owns the exploration bloc where the gas was found, said the decision was made after preliminary surveys established the area has gas deposits.

it had completed seismic tests in the area - a process that involves picking surface vibrations to reveal the rock formations holding oil or gas.

Petroleum secretary Andrew Kamau, while announcing the dispatch of the samples, said experts had done seismic x-rays and generated data that is being taken to foreign labs for analysis and interpretation.

Kamau said the tests are expected to establish the nature of the gas, quantity available and a possible presence of oil in the area.

Experts from the company say East Africa does not have a laboratory facility for such tests, and that this is what prompted Kenya to contact their US counterparts.

Workers sinking a borehole discovered the inflammable gas after they struck a fissure with a hissing sound and confirmed it was gas by striking a match.

had dug 200 metres in search of water for his livestock.

Experts of Geothermal Development Corporation from Nakuru were called after a water borehole construction company accidentally pierced into a rock seal 200 metres down, releasing the gas.

Geochemist George Igunza, who took samples to their laboratory, placed the gas concentration level at 20 per cent. He said the samples will be analysed further for purposes of establishing if oil could be at the location.

The discovery has raised expectations that Kenya could soon rival neighbouring Tanzania, which struck huge reserves of natural gas it is using to generate cheaper electricity.

Kamau said that should the tests confirm availability of commercial deposits, the government will invite other developers to a joint venture to inject capital and hire technical expertise.

Kenya has mapped out 63 oil and gas exploration blocks, part of which are being held by National Oil.

The Kajiado gas discovery has left Kipeto villagers anticipating a spike in land prices and improved fortunes. Oil exploration has been going on in Kajiado West Constituency - around Lake Magadi - with no reported success so far.

Post a comment
WATCH: The latest videos from the Star
by KURGAT MARINDANY @Kmarindany
News
28 October 2017 - 12:00
Read The E-Paper