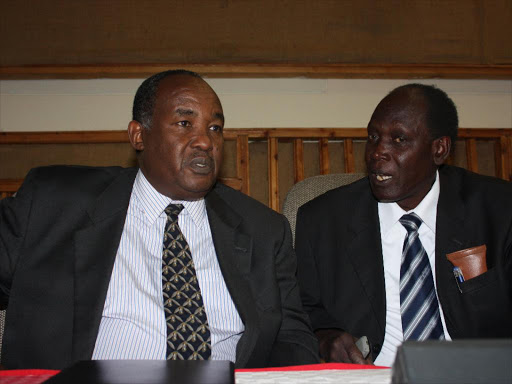 Former IEBC Commissioner ambassador Yusuf Nzibo will chair the Supreme Council of Kenya Muslims for the next five years with a promise to turn around the organization's image.

Nzibo beat long serving chair professor Abdulghafur El-Busaidy with 95 votes against 74 in an election held on Monday at Huda mosque in South B.

Former Kuwait ambassadors and a diplomat at ministry of foreign Office of the Great Lakes Region Mohamed Adan Mahat was elected Secretary general with 89 votes against his rival Hassan Ole Naado who got 80 votes.

Adan Wachu who has been the secretary general for over ten years didn't not defend his seat.

This was the first successful elections in 16 years. Previous attempts to hold elections were frustrated through court battles by some of the organization's top officials or through their proxies.

The long serving national organising secretary Sharrif Hussein was edged out by Abdullatif Salat. Shariff who managed 74 votes against 93 has been in Supkem leadership for over 37 years. The umbrella body for all Muslim organizations was formed in 1973.

“The organisation has been facing a myriad of challenges stemming from bad image to eroded relationship with numerous stakeholders, our key agenda is to redeem that image and rebuild the ties,” Nzibo said.

He said with the new team they will build a new organizational structure and involve muslims professionals across the spectrum in empowering it to serve its intended purpose.

“We going to bring on board not only the professionals but also Muslim organization and other players as well be transparent and accountable to Muslims,” he said.

Despite losing the SG seat Ole Naado on his part said congratulated the new team, saying that he is pleased that his internal led 'coup' in the organisation had borne fruits by having the first ever well organised secret ballot polls.

“I thank my team for their efforts in making sure that the message of change/reforms in SUPKEM is heard loud and clear from all corners of the Republic of Kenya including in the media. My team and I have made our case all through from the court corridors to the court of SUPKEM membership,” he said.

“We have made our case loud and clear to all those who matter. Now that the membership of SUPKEM have given you the mandate, please take it seriously and try all what you can with Allah’s guidance to confront the challenges Muslims are facing in Kenya. We have you in our prayers and wish you all the best. Elf Mabruk!,” he added.