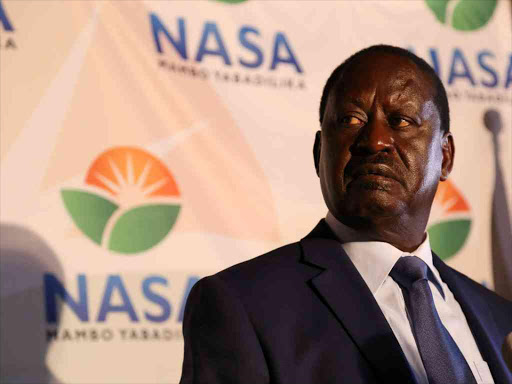 NASA presidential candidate Raila Odinga during a media briefing at a Nairobi hotel where he rejected results of the presidential election, August 9,2017. /HEZRON NJOROGE

Raila Odinga has withdrawn from the October 26 presidential race and demanded that IEBC calls a fresh election.

The decision is in Kenya's interest and is "a win-win for everyone", the

The former Prime Minister said it is only through his withdrawal that the country will have a free and fair election as per the law.

But IEBC told The Star the Opposition leader's withdrawal had already been overtaken by time as he was to do it within three days of being gazetted.

It also comes a day after President Uhuru Kenyatta dared the ODM leader to quit the race and allow the country to move on.

However, Raila says that in 2013, the Supreme Court expanded the meaning of Article 138(8) (b) to include withdrawal of a presidential candidate.

"The implication of this provision is that upon our withdrawal, the election scheduled for October 26 stands cancelled."

withdrawal requires the commission chaired by Wafula Chebukati to conduct fresh nominations as provided for in Elections Act 2011, Section 13 (1).

Fresh nominations will allow other candidates, such as Thirdway Alliance leader Ekuru Aukot, to join the race.

In his statement, Raila also said IEBC has stonewalled meaningful deliberations on necessary reforms to ensure the election is free and fair.

"It has wasted valuable time engaging in public relations exercises intended to create the illusion of motion without any movement," he said.

Raila added NASA has come to the conclusion that there is no intention on the part of the IEBC to undertake any changes to its operations and personnel.

"All indications are that the election scheduled for October 26 will be worse than the previous one."

He added the Jubilee administration's proposed amendments to election laws demonstrate it does not intend to compete on a level playing field.

"The only election Jubilee is interested in is one that it must win, even unlawfully," he said.

Raila also said the Opposition coalition wishes to reiterate what it has stated in the past - that it will not let autocracy back into Kenya.

"It is unfortunate that international actors who have supported Kenyans in their quest for democracy and good governance are now on the side of appeasing dictatorship in the mistaken belief that it will maintain stability," he added.

Post a comment
WATCH: The latest videos from the Star
by OLIVER MATHENGE @OliverMathenge
News
10 October 2017 - 15:00
Read The E-Paper