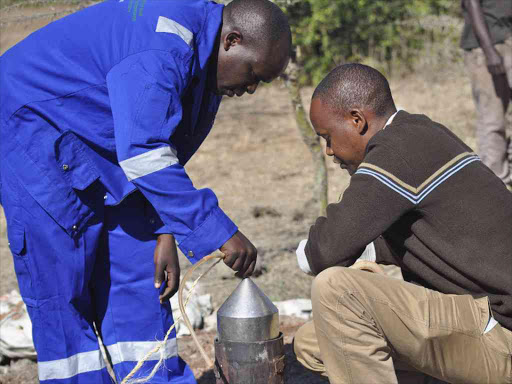 The gas that has been coming out of a borehole in Kajiado county is "pure natural methane", two GDC experts said on Friday, noting they are "100 per cent sure".

George Igunza, who is the company's geochemist and his assistant Nicholas Muli, who is a laboratory technician.

The Geothermal Development Company employees however said further tests will need to be done to establish its concentration.

They said the samples from the site have 40 per cent sodium hydroxide.

"We are taking these samples to our headquarter's laboratory in Nakuru for further testing to rule out questionable issues. We also need to understand the concentration at the bottom of the well," Igunza told the Star at the site.

"The next phase of investigations to be carried out by GDC experts will determine the extent of the resource and its purity."

Igunza and Muli said the tests will take up to 30 days.

Methane is a gas compound with the chemical formula CHâ and is a group-14 hydride.

It is the simplest alkaline and the main constituent of natural underground gas.

The gas was discovered by hydro-geologists sinking a borehole at a private farm in Inkokirding’a village.

Locals said the discovery will automatically increase the value of their land.

David Sorimpan, who owns 3, 000 acres in the area, told The Star on Friday the cost of land in Kipeto region is Sh2 million per acre.

"We will not be surprised if the cost of land increases to even Sh10 million."

Igunza said other key players such as KenGen, National Oil Corporation and Tullow Oil will be involved in further research.

Tullow has a track record of discovering significant oil resources in East Africa.

It first started exploring oil in Uganda in 2006 and

has taken up exploration in northern Kenya in areas of Turkana and upper areas of eastern.

Other natural gases have been discovered in North Coast.