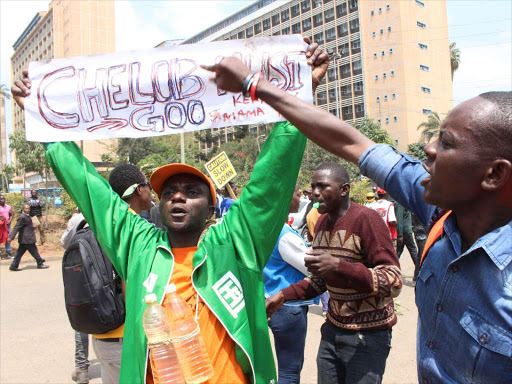 A section of NASA supporters demonstrate in the city demanding the resignation of IEBC CEO Ezra Chiloba on Tuesday,September 26. /COLLINS KWEYU

IEBC CEO Ezra Chiloba has been left out of a new team formed to manage the October 26 repeat presidential election.

Chair Wafula Chebukati unveiled a new team on Friday in which Chiloba and three other officials have been excluded.

He said the new team will not include officers accused of bungling the August 8 general election that was nullified by the Supreme Court.

Chiloba will, however, retain his role as chief accounting officer.

The current team is as follows:

The Opposition has called for countrywide demonstrations on Mondays and Fridays calling for Chiloba's removal before the repeat poll.

NASA has written to the Nairobi county police commander Joseph Koome saying it will add Wednesday to next week's protests.

Early in September, Jubilee had protested against the team Chebukati picked for the repeat election.

"We have received credible information that in the list, there are people known to be partisan," said party secretary general Raphael Tuju.