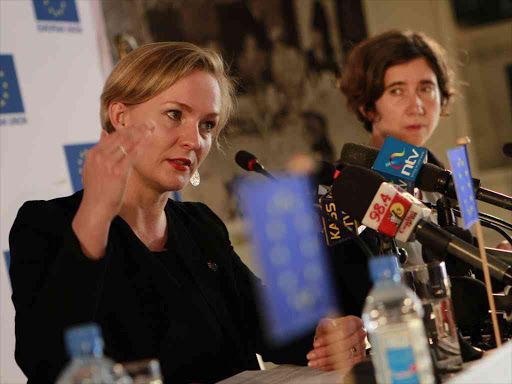 EU election observers yesterday cautioned Jubilee against trying to change electoral laws and NASA against inflexible demands ahead of the presidential rerun.

In a statement, the EU observer mission urged NASA under Raila Odinga to desist from making tough demands to the IEBC. The Jubilee Party of President Uhuru Kenyatta was told to shelve its controversial push to amend election laws ahead of the October 26 poll.

“Demands for far reaching changes to election administration need to be matched with constitutional requirements. They escalate tension and antagonism,” the EU Observer Mission, led by Marietje Scaake, said.

They said, “Late amendments to the electoral legislation risk being politically polarising.”

The observers spoke a day after Western envoys also said the laws should not be changed now. The EU observers said the proposed changes would hinder IEBC’s poll preparations.

“...there are some potentially positive proposals. These include attempting to clarify the status of keyed-in results and harmonising existing legislation with jurisprudence,” they said. On proposed changes in the IEBC, the observers said said the phrase “absence of the chairperson for any reason” is insufficiently defined. They said the reduced requirements for a quorum risk inconsistent decision-making.

Post a comment
WATCH: The latest videos from the Star
by GIDEON KETER @ArapGKeter
News
04 October 2017 - 00:45
Read The E-Paper