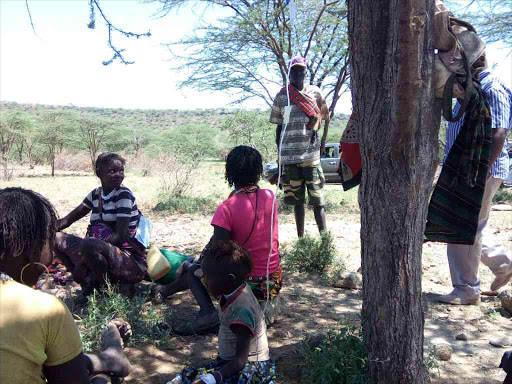 A section of more than 400 Pokot residents who turned up for an open-air medical camp at Kongor in Tiaty Sub-county, Baringo County, on October 2, 2017. /JOSEPH KANGOGO

that 10 people, including children, have died since the outbreak last week.

"Out of 14 tested at Koloa dispensary on

Monday, 12 tested positive for malaria," Kiptalam said, adding they were taken to

Kiptalam, who visited several affected areas with Tirioko MCA Sam Lourien and journalists, said the most affected are children,

expectant women and the elderly.

She said the child last Thursday

developed a fever accompanied by

Louren regretted that there is no hospital in

Akoret division so patients have to travel long distances for treatment.

"Moreso, many of our people are illiterate and unaware about use of mosquito nets. Majority of them are pastoralists and herd their livestock in bushes far away from roads and homes," he said and blamed poor leadership for lack of good roads and communication networks.

The MCA urged the government, counties and well-wishers to donate funds to building facilities in

He also asked the county to

consider deploying Beyond Zero mobile clinics for emergencies so deaths are prevented.

Nakopir declined to confirm the number of deaths reported so far but Red Cross admitted the seriousness of the outrbreak in Akoret.

"It is true the disease has seen several patients admitted in hospitals but we are yet to receive records of deaths,” Red Cross North Rift coordinator Michael Ayabei told The star by phone on

But East Pokot deputy commissioner Yusuf Huka assured everything is in control and dismissed fears of deaths.

"Our team of health officers from Chemolingot Sub-County Hospital went to the ground and contained the situation. They have not reported an outbreak and deaths."

But he confirmed several people are being treated for malaria at

"The entire place is bushy and the people herd their livestock day and night. A high prevalence of malaria is expected," he said.

It is not unusual, he continued, also noting children, the elderly and expectant mothers are at high risk.

But he assured county health facilities are well-equipped with staff and drugs so they can tame the spread of any disease.

Post a comment
WATCH: The latest videos from the Star
by JOSEPH KANGOGO
News
03 October 2017 - 12:00
Read The E-Paper