IEBC set to push election date after request from Morpho 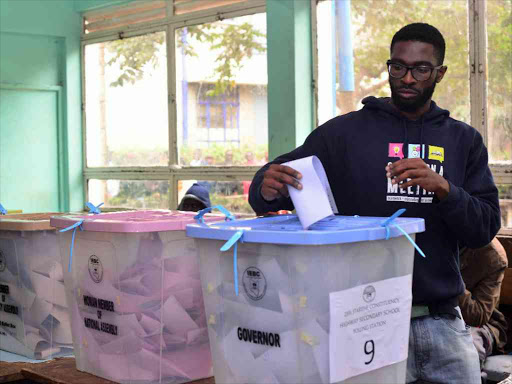 A voter casts their ballot at Highway Secondary School during the August 8 general election. /FILE

IEBC is today holding a plenary to consider a request by Safran Morpho to push the October 17 election.

Last week, the French firm presented its audit report and asked the electoral agency to extend the date to October 26 to allow it to upgrade the system.

Morpho is the supplier of the Kenya Integrated Elections Management System used for voter identification and transmission of results.

During last week's meeting, it said that an audit of the system showed that there was no hacking as claimed by the Kenyan opposition.

The company, however, wants to upgrade the system and to clean out any data held by the gadgets ahead of the repeat presidential poll.

to hold fresh polls on October 17 saying it is a date set by Jubilee.

Raila also said the elections cannot be held before all the terms and conditions set by them are addressed by the electoral agency.

According to an Infotrack poll last week, 84 per cent of Kenyans support the October 17 election date IEBC set following a directive by the Supreme Court.

Fourteen per cent opposed the date, with 76.7 per cent of this group saying they want it pushed to

Post a comment
WATCH: The latest videos from the Star
by STAR REPORTER @TheStarKenya
News
18 September 2017 - 09:00
Read The E-Paper