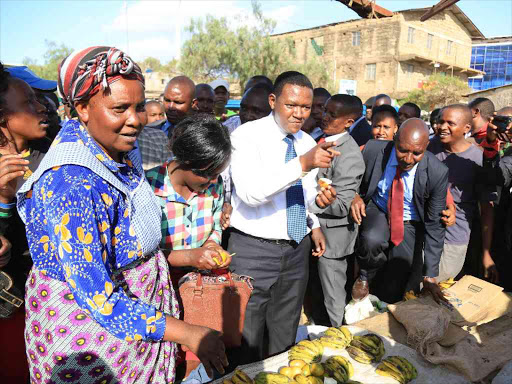 Machakos Governor Alfred Mutua addresses the public at Kakuyuni Market in Kangundo sub-county where he launched campaigns for President Uhuru Kenyatta ahead of the October 17 poll, September 13, 2017. /GEORGE OWITI

Mutua said the Opposition coalition’s deputy presidential candidate will not get a direct ticket for the top seat in 2022.

He said on Wednesday that Kalonzo will instead be subjected to nominations for the position.

where he launched campaigns for President Uhuru Kenyatta's re-election.

“With Western Kenya having a larger voting block than Eastern, the most likely candidate for NASA presidential candidate in 2022 is Musalia Mudavadi,” said Mutua.

Former Meru Governor Peter Munya lasted barely a day in the coalition before meeting and announcing he will work with Uhuru and DP William Ruto.

In March, Mudavadi distanced himself from calls by Wiper leaders for NASA talks to respect the Cord agreement.

The MoU demanded that Raila supports Kalonzo's presidential bid after serving the first term. It brought together Raila, Kalonzo and Wetang'ula, but Raila did not win the 2013 election.

For the 2017 election, the flagbearer will not be allowed to run in 2022, and will instead endorse one of the other Pentagon members.

'UKAMBANI BETTER OFF WITH UHURU'

Mutua said the best option for Ukambani residents is to re-elect Uhuru who will return the favor in 2022 by mobilising Central Kenya votes so he can take over.

He reiterated his commitment to contest for the presidency after Uhuru finishes his second and final term.

Ruto wants to succeed Uhuru and others who may be in the race are Munya, Baringo Senator Gideon Moi, Mombasa Governor Hassan Joho and Kilifi's Amason Kingi.

that this time round, Uhuru will get more votes than he did in the August 8 vote.

said majority of Kenyans want the fresh presidential election conducted on October 17 as scheduled by IEBC so they can move on.

He said postponing the poll as NASA leaders have

demanded will require more funds and resources that need to be channeled to funding development projects.

Mutua expressed confidence Uhuru will recapture the seat albeit the Supreme Court’s decision to invalidate his victory.

“The court invalidated the poll on grounds of irregularities and illegalities in the process but not the numbers of votes Uhuru garnered on August 8."