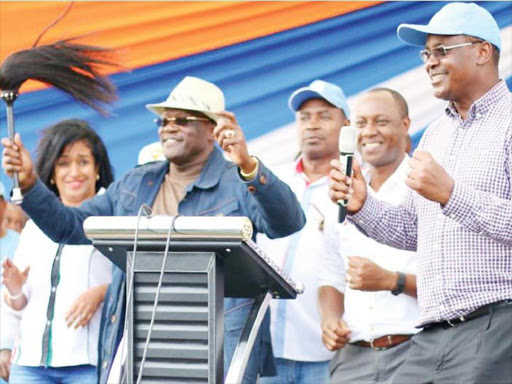 NASA has tasked outgoing Machakos Senator Johnson Muthama with leading its campaigns in Nairobi and ensuring the Kamba community rallies behind Raila Odinga and his running mate Kalonzo Musyoka.

Muthama yesterday dismissed claims that he has ditched Kalonzo, saying he has relocated to the city to ensure the Kambas support for Raila and Kalonzo remains intact.

“In 1983, Mulu Mutisya told me to support Kalonzo when I didn’t even know who he was. He won. We remained in Kanu until we moved to LDP, later to ODM-K (now-Wiper) and NASA. How foolish could I be to abandon him today?” Muthama said.

He said he will traverse the city to ensure NASA and Wiper get the Embakasi South, Kamukunji and Lang’ata MP seats, and not less than 20 MCAs.

Muthama said he will ensure Governor Evans Kidero and Deputy Governor Jonathan Mueke are reelected. He spoke in City Stadium,

Nairobi, during a meeting with Kamba community leaders.

Kidero said Jubilee is duping the Kamba community into supporting Mike Sonko for governor with the intention of jailing him after winning to ensure his running mate Polycarp Igathe takes over.

He said his administration was frustrated for the first three years through court suits, adding that forces of darkness conspired to derail him after his victory in 2013.

“The first election petition after the 2013 election was against Kidero and it remained there for three years,” Kidero said.

He dismissed Sonko as a jailbreaker who is being sought after over cases of escaping lawful custody.

The incumbent urged the Kamba community to vote for him so he can complete his projects, “as I groom Mueke to take over”.