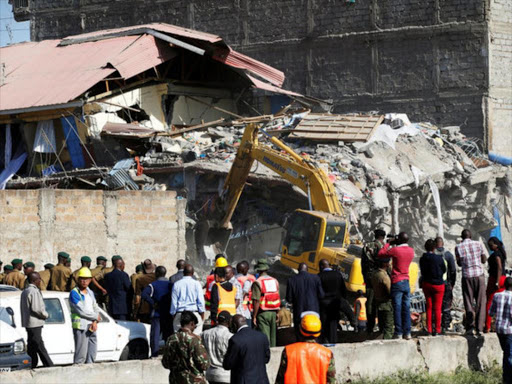 Emergency personnel work at the scene after a building collapsed in a residential area of Nairobi, Kenya June 13, 2017. REUTERS

About 15 people are missing after an seven-storey building collapsed in a residential area in Kware Pipeline, Embakasi,

City Hall said the building, which was put up in 2007, was unplanned and was not approved.

"Kware area was unplanned. No developments are allowed there. But you find that most of these developers were brought by politicians,” said Nairobi Lands executive Christopher Khaemba.

Police are looking for the owner of the building, only identified as Karanja.

So far, 121 people have been accounted for after they were evacuated moments before the building collapsed. The incident occurred on Monday night with the

owner of the building unknown.

The operations were hampered by lack of heavy excavation machines and poor roads.

"There has been delays because of the state of the roads," a police officer in charge of the operations said noting that the operations were still ongoing.

days earlier, the building had shown imminent signs of collapse, including cracks and bending of walls, and most tenants had vacated.

Monday, the structure started to cave in at around 6pm and finally came down at about 10pm,"

Majiwa said the cause of the collapse has not been established adding that it is likely to be poor workmanship and use of substandard materials.

Witnesses said the building had been condemned after a number of cracks opened up on its walls.

Kenya has seen similar tragedies in the past. A total of 49 people died mid-last year when another building collapsed during a heavy, nighttime downpour in a poor neighbourhood.

On May 10, one of the survivors of a building collapse in Kirinyaga died.

The building collapsed at around 8 am, trapping several construction workers.