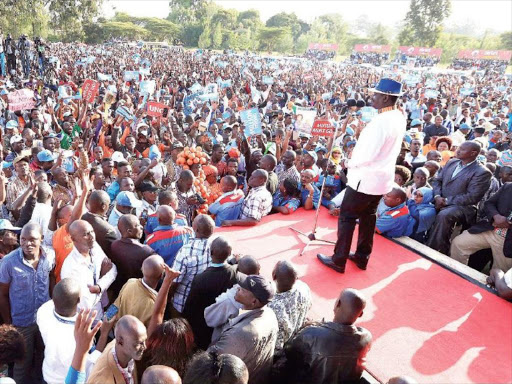 JUBILEE and NASA are engaged in vicious online wars as they battle for the hearts and minds of 19 million voters.

The massive investments in digital messaging could well revolutionise political campaigns in Kenya as both Jubilee and NASA step up customised approaches to win voters.

President Uhuru Kenyatta’s team and that of his main rival Raila Odinga have made heavy investments in digital media. Meant to complement their big political rallies, the two are determined to reach out to potential voters at the convenience of their target audience through all channels, including their phones.

A day after Raila was named NASA presidential candidate, someone paid Google to promote a website named “The Real Raila Odinga”, full of negative stories and claims that the Opposition candidate is corrupt, violent, crooked and a liar.

It also makes unsubstantiated allegations, including claims that “Raila faked food poisoning to avoid a meeting with other NASA co-principals Musalia Mudavadi, Kalonzo Musyoka and Moses Wetang’ula”. It was referring to an incident in March this year when he was admitted at the Karen Hospital after he fell ill.

The top search result for Raila on Google is “The Real Raila Odinga” website, clearly marked as an advert.

Analyst Mutahi Nguyi has also set up several platforms on YouTube, Twitter and Facebook, where he has been posting articles and videos of why Kenyans should not elect Raila.

“After the last election, Human Rights Watch found that Raila and ODM was helping coordinate the riots throughout Kenya,” one of the posts on Facebook states, rekindling memories of the deadly 2007/2008 post-election violence.

The website claims that NASA Pentagon members have previously traded accusations against each other and are now hugging on political podiums without resolving issues.

In one of the videos on the controversial website, Raila in a 2002 rally accuses his co-principal Musalia Mudavadi and retired President Daniel Moi of having been the architects of the Goldenberg scam.

In a recent interview, Raila insisted that Musalia was cleared of the multi-billion-shilling scam that nearly brought Kenya to its knees.

Raila's team on the other hand has hired influential bloggers with millions of followers on social media to lead its dirty campaigns. Some of the bloggers use pseudonyms to comment on stories published by mainstream news organisations.

The bloggers continuously collect, monitor and analyse messages from Jubilee before responding to them almost instantly.

But Uhuru’s strategists have taken the campaigns to an all-time high, with leading international data firms already on board.

CA is said to be capable of trawling Facebook and buying up commercial consumer datasets to identify 'persuadable' voters. An expose by the Guardian newspaper of the UK last month claimed that CA, in conjunction with its sister company AggregateIQ in Vancouver, Canada, essentially won the Brexit vote using the same strategy. It then bombards the persuadable voters with more than a billion social media posts and adverts.

Cambridge Analytica is credited with helping Candidate Donald Trump to win the American presidential election last November and with helping the Leave side to win in the Brexit referendum in the UK last June. It has been described as a “psychological warfare firm”.

But apart from the global firms, both Jubilee and NASA have also invested in local tech-savvy teams drawn from the information and communications technology industry.

ODM Secretary General Agnes Zani told the Star that they are “handling every component of our campaigns seriously”, declining to divulge their online strategy.

The Raila team has turned a widely advertised video on Jubilee delivery achievements against the ruling party. The video's adverts, currently running on TV, showcase what Jubilee describes as its achievements over the past four-and-a-half years is dubbed “A Journey of Transformation”.

But in the corrupted video, widely shared on WhatsApp groups, NASA terms the Jubilee tenure “A Journey of Gimmicks and PR Stunts”.

They chide Jubilee for claiming to have transformed the country's healthcare, yet Sh5 billion was allegedly lost at the Ministry of Health’s Afya House headquarters in what has come to be known as the MafyaHouse scandal.

Questions over the handling of donor money at the Ministry of Health led to suspension of Sh2.5 billion funding from the US government.

“Food security? Brokers and middlemen making billions at the expense of farmers and hungry Kenya,” it adds.

The video that ends with the voice of Musalia urging NASA supporters to vote out Jubilee also claims that the Sh338 billion Standard Gauge Railway is not economically viable.

Sources privy to activities in NASA promised it will be an emotional campaign, where both videos will be played and Jubilee statements used to show Kenyans how they have been suffering.

“We have enough content to push on all media platforms and a strong team to broadcast the best,” said a source at Capitol Hill.

Opposition bloggers believe the government harasses them for telling the truth. They argue pushing the government to address historical injustices amounts to hate speech.

Both the NASA and JP teams use a Twitter deck, which

hosts advanced features to get the most of social network support. It manages multiple accounts, the schedule for posting and builds Tweet collections, among other features.

Jubilee and NASA believe they can capitalise on social media users to reach out to millions of voters through a ripple effect.

Besides, there is Uhuru's own Facebook page and Twitter handle that has about 3.068 million likes and 2.13 million followers, respectively. Here, Uhuru’s team actively post his schedule, campaign videos, and press statements.