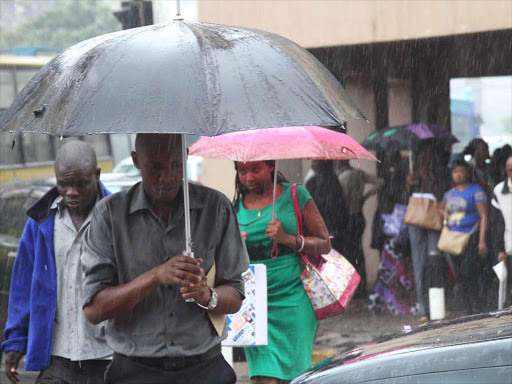 People shield themselves with umbrellas from rain along Kenyatta Avenue on Monday, November 09, 2015. /COLLINS KWEYU

Poor rainfall distribution characterised the seasonal rains between March and May as many regions received less rain than the expected amount.
The seasonal rainfall was characterised by late onset as well as poor distribution, both in time and space. The rains occurred in the second half of April and in May.
An assessment by the Meteorological department indicates seasonal rainfall has ceased over most parts of the country. However, the Western and Coast regions are expected to continue receiving rainfall in the June-July-August season.
“Most meteorological stations in the country recorded below 75 per cent of their seasonal Long-Term Means for March to May,” meteorological services director Peter Ambenje said yesterday.
According to the weatherman, the climate outlook for June to August will experience warm daytime temperatures than average during the period that has previously been characterised with extremely cold weather. However, a few days may turn out to be extremely cold with temperatures falling below 18°C in some areas.