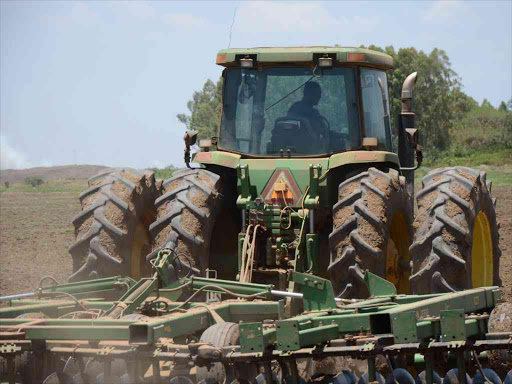 a tractor ploughing the land in preparation for the rice planting season at Dominion Farms in Siaya county on February 28./FILE

More than 350 workers of Dominion Farms Ltd in Yala Swamp, Siaya county, are on strike to protest against what they say are Sh30 million salary arrears.

They claim they have not been paid for five months, since January.
The workers marched to the Siaya county commissioner’s office in Siaya town to present their grievances on Wednesday.
Led by security guard John Owino, they also accused the company of refusing to remit their statutory deductions for more than one year.
The workers said the money, supposed to be remitted to the National Social Security Fund, the National Hospital Insurance Fund and KRA has not been sent since April last year.
Owino said they are unable to feed their families, access healthcare or pay school fees.
They urged the county commissioner and Siaya governor to intervene.
Siaya deputy commissioner Joseph Sawe, Labour officer Margaret Oduor and MCA Leonard Oriaro failed to persuade them to go back to work.
They said the problem will be solved, but workers refused to return until they are paid. They gave the Dominion Farms until Monday to pay them. Otherwise, they plan to camp at the company’s gate until dues are fully paid. Dominion director Chris Abir did not pick calls seeking comment.
mcas angry
In February, Siaya MCAs threatened to destabilise farm operations as punishment for allegedly being called ‘thugs’ by CEO Calvin Burgess.
They turned the heat up on Burgess for deviating from the agreement he reached with the community at the start of the venture.
MCAs accused the investor of reneging on an earlier agreement to build

schools, hospitals and roads.
This, according to the MCAs, was to be part of Dominion’s social contribution for being allowed to use the wetland.