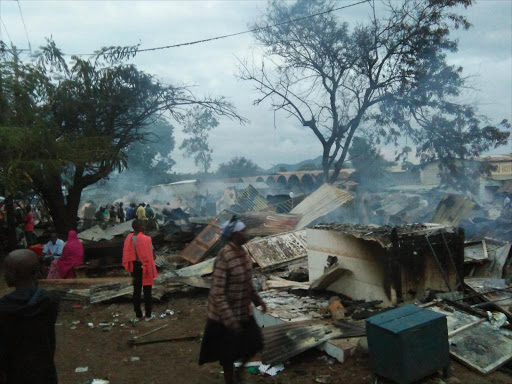 Residents at Homa Bay Town market where properties worth millions of shillings were destroyed by fire that began at midnight, May 27, 2017. /ROBERT OMOLLO

Millions worth of property was lost after a fire razed shops and businesses in Homa Bay town market on Saturday.

The fire, whose cause is yet to be established, started at around 12.30am along Shivling street within the town.

"It escalated spontaneously to other shops," he told journalists.

He said it is the second time traders in the market are experiencing losses due to fire.

"The frequency of fire outbreaks in the market raises eyebrows," he said.

Early this year, more than 20 traders lost property worth Sh5 million when their stalls were razed.

Area OCPD Esau Ochorokodi said on Saturday they are contacting affected traders to record statements from them.

He said they are yet to establish the value of properties lost, but noted that there were no casualties from the incident.