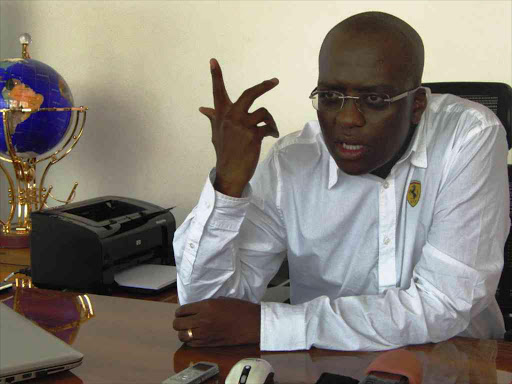 described himself as "Mr Fix it" and promised to restore the county's glory.

Igathe, who is Vivo Energy MD, said he accepted Senator Mike Sonko's call to be his running mate because he has a commitment to serve.

"I am a Mr fix it. I love to be in the trenches and I am 'ego-less' because I do not take credit for what I have done," Igathe

said during an interview on KTN on Friday.

"Many take political office as

an opportunity to enrich themselves but for me, this is a special opportunity not to attract value but to serve the people."

Sonko and Igathe will launch their manifesto next week at an event President Uhuru Kenyatta is expected to attend.

The two will face Governor Evans Kidero (ODM) and Deputy Governor Jonathan Mueke (Wiper). The two parties are both part of the National Super Alliance.

"We want to ensure we align ourselves to the national agenda. We will leave no one behind," said the MD.

Igathe noted that in less than four years, he managed to move the abandoned Vivo to position three in the energy sector and eventually to position one.

"Vivo has beaten everyone. We are now the leaders in the energy sector. If we did this while there, we can do great while serving in such an esteemed office."

He also noted that for the last 20 years, he has saved a lot of money and that his wife is a manager in the corporate world so Nairobians should not worry about looting.

"I am a faithful and God-fearing child of God and I am sure he will guide me as I deliver services to the people."

Sonko settled on the managing director on Tuesday instead of former Starehe MP Margaret Wanjiru who had been tipped as his choice.

Deputy President William Ruto endorsed the pair when he hosted them at Jubilee Party's headquarters on Wednesday.

The Star learned that State House had a hand in picking Igathe as Sonko's running mate.

President Uhuru Kenyatta had tasked trusted State House operatives to interview about 11 candidates who had been lined up.

The President is said to have asked private secretary Jomo Gecaga and Solicitor General Njee Muturi to oversee the recruitment.

They settled on Igathe who is also said to be Jubilee's strategist and Uhuru's adviser on energy issues.

Post a comment
WATCH: The latest videos from the Star
by PATRICK VIDIJA @vidijapatrick
News
19 May 2017 - 09:00
Read The E-Paper