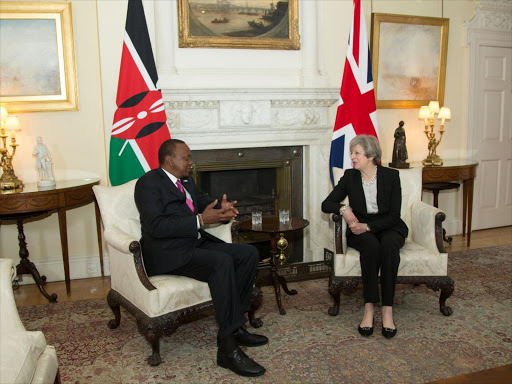 President Uhuru Kenyatta when he held talks with British PM Theresa May at the sidelines of the London Somali conference, Wednesday, May 11, 2017. /PSCU

President Uhuru Kenyatta has assured British investors in Kenya that businesses are unlikely to be affected by the August elections.

The President told the investors at a forum in London on Thursday that the state is committed to free, fair and peaceful elections.

He said the Constitution had led to the creation of robust institutions that ensured a transparent process.

"We have independent institutions such as the Judiciary and IEBC. We have free media," the President said.

"We are looking forward to a peaceful process. Business should not be impacted by the process."

"You should keep your money and faith in our country," he urged the business leaders at the sidelines of the London Conference on Somalia.

The group of investors included those drawn from

the East African Association whose membership include UK companies with interests in East Africa.

The United Kingdom has hundreds of companies with investor stakes in Kenya running into trillions of shillings.

with UK shareholders include Safaricom which is partly-owned by Vodafone.

The other is Kenya Breweries where

Diageo is a major shareholder.