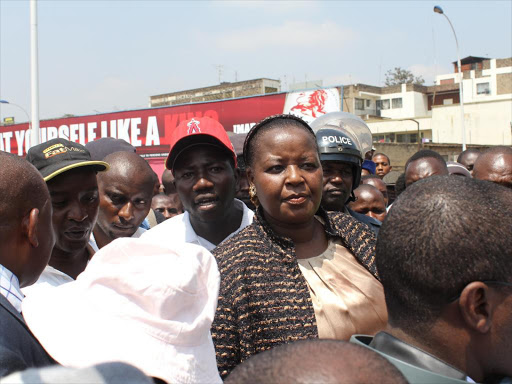 Bishop Margaret Wanjiru was arrested on Wednesday after leading supporters to disrupt primaries at the City Park polling centre.

The Nairobi governor aspirant and her supporters stormed the centre and destroyed voting materials over a mix up in the ballot papers.

Moments before her arrest, Wanjiru claimed she had found ballot papers of Dagoretti South in the station which is in Karura ward, Westlands constituency.

"I am calling upon the National Elections Board to repeat the elections for City park market polling station since the exercise at this station started at 3pm and we have now found ballot papers for Dagoretti here," she said.

She said she was inspecting the voting process when she found a booklet with the names of aspirants in another constituency.

Wanjiru was arrested while going to Jubilee party headquarters to file complaint over the same.

Last week, a video emerged of the Bishop giving out handouts to youths as Jubilee primaries were about to kick off.

In the 52-second video, Wanjiru, dressed in a Jubilee party t-shirt, is seen atop her vehicle holding a wad of notes and handing out single notes to a crows surging around the convey.

Post a comment
WATCH: The latest videos from the Star
by WILLIAM MWANGI @memwarwilliams
News
26 April 2017 - 18:00
Read The E-Paper