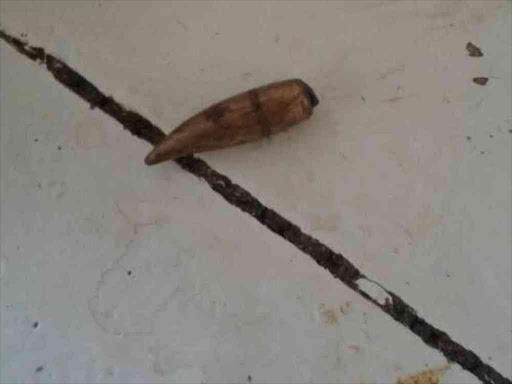 A bullet at Ol Maisor Ranch in Laikipia following a raid by Pokot bandits on April 13, 2017. /FILE

Militias on Thursday shot dead an employee of Ol Maisor ranch in Laikipia outside his house at around 7.30 pm.

The staff at the ranch tried to save Duncan Murimi but he succumbed to the injuries.

"I tried to save him with my trauma kit after we collected him from the building where he was attacked."

"He died as I worked on him. I realised he had no chance when I saw his injuries but I did my best. It was hopeless," a source told the Star.

The source added that the militia, suspected to be from the Pokot community, did not steal anything but only killed the young man.

This came barely a week after another Ol Maisor Ranch employee was shot in the stomach by Pokot militias.

The bullet lodged in Athaju Eloto's back was removed at Nyahururu district hospital.

The agencies are working with the teams as they are unfamiliar with the area's terrain.

The invaders have been terrorising businesses in the area in search of pasture and water as the drought bites.

They have also murdered and injured scores of smallholders, ranch employees, ordinary people including women and children.