Ban on holiday tuition is still on - Matiang’i 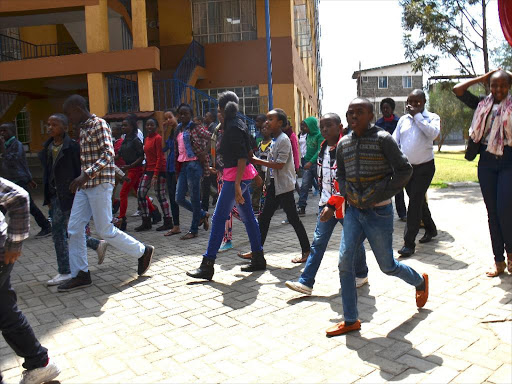 A section of standard 7 and 8 pupils attending holiday classes at the Happyland School walk to their classes accompanied by some of their teachers on August 13,2016. /file

He yesterday said head teachers who keep students in school will be prosecuted and their schools’ registration certificates could be revoked.

Speaking to the Star on the phone, Matiang’i said the government is working with the county education directors to ensure no school conducts tuition.

“The Basic Education Act outlaws holiday tuition because it denies children a chance to learn basic skills. The holiday was put in place to give the children an opportunity to grow, learn other basic skills and interact with their parents,” he said.

Head teachers found guilty will be liable to a fine not exceeding Sh100,000 or imprisonment for a period not longer than a year or both as spelt out in the Basic Education Act.

The law also applies to teachers found conducting holiday tuition to groups of students outside class.

Holiday tuition was criminalised in 2012 by then Education minister Mutula Kilonzo. He said the programme denied children a chance to engage in extracurricular activities, adding the curriculum can be covered during the school term.

Concerns were raised about the strain students are under after students in more than 300 secondary schools rioted.

A parliamentary committee set up to probe the unrest interviewed students who complained about an overloaded curriculum and long school terms.

Matiang’i told parents not to

He urged parents to spend time with their children and teach values and discipline.

“The school curriculum can be covered during the normal school days and should not be extended to weekends or holidays,” Matiangi said.