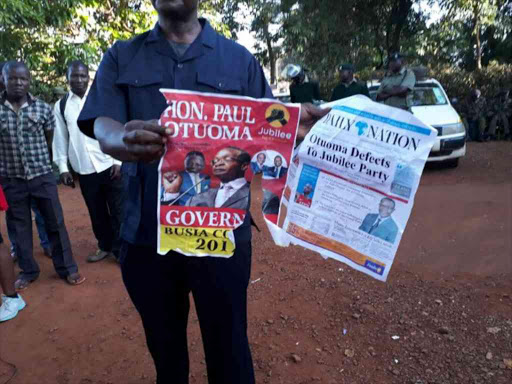 Some of the leaflets circulated in Busia county with the claim that Funyula MP Paul Otuoma has defected to Jubilee Party, April 13, 2017. /COURTESY

Nation Media Group has disowned an article circulated in Busia with claims that Funyula MP Paul Otuoma has defected to Jubilee.

nominations kicked off on Thursday.

In a statement, the media house condemned the use of their brand for political battles.

"We dissociate ourselves from such leaflets and have taken immediate action to report this violation with relevant authorities for appropriate action," NMG said.

Otuoma is battling it out for Governor with Sospeter Ojaamong, who is a member of Raila Odinga's ODM party.

The MP termed the leaflets "desperate sideshows" and accused his rivals of being behind them.

"This is foul play and

it's unfortunate that some county vehicles are being used to distribute these materials," he said.

an OB number after recording a statement with police.

Otuoma said last year that he will not leave ODM for any party.

claiming they were "frustrated" by the party's leadership.

"Otuoma is a Jubilee candidate. There is full proof...I have not seen the leaflets [but] whether they come out or not, the fact remains," the Governor said.

The county's nominations were delayed due to lack of ballot papers.

The process which had been set for 6am had not yet started by 9am over lack of ballot papers.

Residents appeared confused while some seemed exhausted and annoyed by the lack of coordination.