Alert on the armyworm outbreak in Kenya 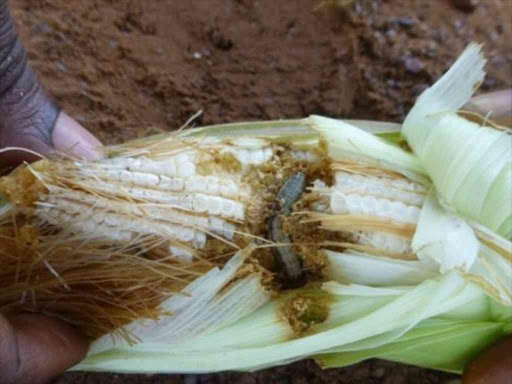 CHARACTERISTICS OF THE FALL ARMYWORM MOTH

The FAW is a migratory pest which undergoes a full eggslarva- pupa-adult metamorphosis. The female lays tiny eggs in masses of 150-200 which are covered with protein sheath to protect them from attack by natural enemies and pesticides. The larval stage is the most destructive phase, feeding on soft plant tissues. Adult Moths are active at night and mates in the evening.

How to Identify FAW:

The fall armyworm caterpillars are green, brown or black in color depending on development stage. A mature caterpillar has a distinct white line between the eyes, which form an inverted “Y” pattern on the face (this is seen when the worm is placed facing you). In addition, there are pronounced four black spots aligned in a square on the top of the 8th segment near the back end of the caterpillar.

Fall armyworm is a ferocious feeder which upon invasion quickly destroys maize crop. The caterpillars feed more on the outer foliage, making large and ragged holes. Severe feeding gives the appearance of maize that has been damaged by hail. After feeding, FAW caterpillars leave behind large amounts of moist sawdust-like frass near the whorl and upper leaves. The caterpillar also damages the silk and tussles therefore interfering with grain set and ultimate yields.

Economic impact of FAW in Kenya:

Attack on maize at early vegetative stage can result into 100% crop loss if no control measures are taken. The occurrence of this pest in the key seed maize production areas compounds the problem. Maize is the most important staple food crop in Kenya, with a per capita consumption of more than 78 kg per annum. Currently an approximated 11,000 Ha of off-season maize has been infested. Therefore this pest has the potential to cause national food insecurity unless the appropriate measures are implemented. Thus this pest is of great socioeconomic importance and warrants urgent attention.

How is FAW spread?

The adult moth has capacity to fly over 30km in one night drifting through air current. The female lays 1500- 2000 eggs in her life time, enabling the pest to quickly establish in new areas. Movement of infested plant materials will aid in transferring the different FAW stages within the same farm or to distant locations. In Kenya, long distance movement of green maize for roasting is a thriving business, which poses serious threat in spreading the pest.

In responding to the FAW invasion, the Government has:

1. Issued a national alert to all counties and disseminated necessary technical information

3. Engaged key stakeholders and development partners for concerted efforts by all towards containing the outbreaks of this pest.

HOW TO MANAGE FAW

Farmers are encouraged to use a combination of the following management options:

For early warning and detection of low numbers of FAW presence, farmers should mount at least one pheromone trap per Ha

1. Deep ploughing exposes the pupae to predators and solar heat

3. Use hands to squash the caterpillars when infestation is in small farm plots. In addition, collect and drop caterpillars in hot water to drown them (Remember killing one caterpillar prevents multiplication of more than 1500 -2000 new caterpillars after a period of less than 4 weeks).

For effective control in maize, spray at least three times starting at two weeks after emergence, at knee high and just before tussling. Spraying should be done late in the evening when caterpillars are most active.

The public is discouraged from moving infested plant materials to areas where the pest has not been reported.

For more information on the Fall Armyworm, farmers and those interested are requested to contact the Ministry’s Plant Protection Division (PPSD) - [email protected] com or the nearest county agricultural offices.

Post a comment
WATCH: The latest videos from the Star
by Ministry of Agriculture, Fisheries and Livestock
News
13 April 2017 - 12:00
Read The E-Paper