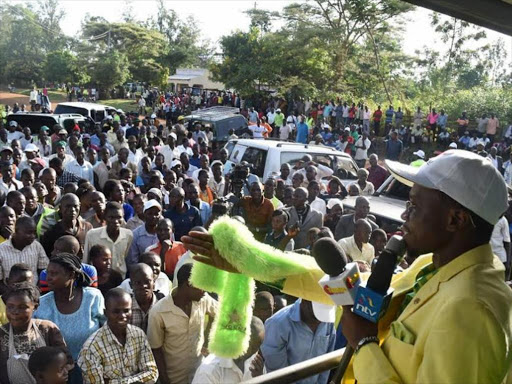 Budalang’i MP Ababu Namwamba has asked Musalia Mudavadi and Moses Wetang'ula to push for one of them to be named NASA flag bearer.

He said the Luhya community has supported presidential candidates from other regions and should get a chance during the August polls.

Namwamba urged the Amani leader and his Ford Kenya counterpart not to accept to play second fiddle in the bid to occupy State House.

The National Super Alliance brings together the two alongside Raila Odinga of ODM and Wiper's Kalonzo Musyoka.

He was Raila's right hand but he left the party saying he had been frustrated and that the Opposition leader had failed as a mentor.

"Let my brothers Mudavadi and Wetang'ula stand ground and demand to be supported to fly the NASA flag," he said.

"For how long will members of the Luhya community support others? If they are not ready, let them make it public so that I start my preparations for 2022."

He spoke at Kimait, Bungoma West sub-county after opening a Labour Party office in Bumula on Sunday.

The four NASA principals are currently at a retreat at Kilifi and are expected to agree on the line-up they will use to take on Uhuru.

The meeting follows intense lobbying by MPs from the four Opposition parties in a bid to have their leaders chosen as flag bearer.

This was heightened when National Assembly Minority leader Francis Nyenze said Kalonzo would leave NASA if not given the chance.

The Wiper boss denied the claims but said Nyenze had nothing to apologise for.

ODM MPs, among them Gem's Jakoyo Midiwo, have also maintained that Raila is the best person to take Uhuru and DP William Ruto home.

On March 12, Mudavadi told his colleagues to give him the chance but said he would work with whoever is chosen.

The co-principals have also dismissed information leaked to the media on the Opposition's possible line-up.