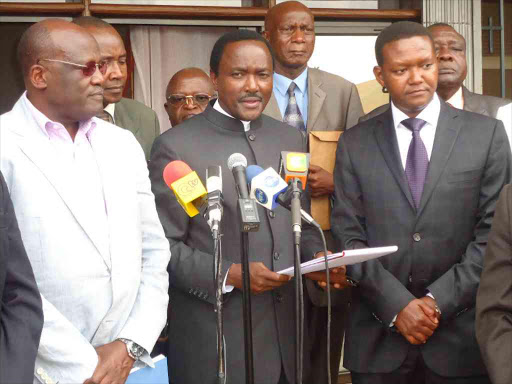 Machakos Senator Johnson Muthama has dismissed claims of vying for the position in Nairobi saying his remarks were misinterpreted.

Muthama said city politics was one of his options but he did not name the party he will use.

“If I believe I have the muscles to go for the Nairobi senatorial seat and win. What is wrong with that? Will that not open doors for another Kamba to take after me in Machakos and grow the community’s representation nationally?” he asked.

Muthama said that his political career had grown from the regional to the national level and that he was therefore at liberty to vie anywhere and for any seat.

“Mimi si jogoo wa kuwika shambani peke yake. Nataka kuwika pia mjini because that is what we call being a real man”, he said.

(I am not a cock that only crows in the village. I want to crow in the city too...)

But in a phone interview with the Star on Tuesday, the Senator accused the media of misinterpreting his remarks during the

"I have paid my nomination fees to Wiper party to be nominated as a candidate for Machakos county," he said.

"I said I was contemplating moving to a different county, Nairobi

maybe. [This was misinterpreted by the media]," he said.

He reiterated that he is a national politician, saying he can move to counties including

"I am a national politician. I can move because I fear nothing and believe in myself...I can be elected anywhere."

Muthama said the country should consider such moves to

"If I declare candidature for Kiambu senator, will I be rejected because I am a kamba or because I cannot deliver services? It is time we took such risks to show Kenyans we can be bred and lead in any part of this country," he said.

He advocated for democracy saying losing an election under such circumstances would amount to a "democratic loss".

Muthama further accused the media of trying to put a wedge between him and Wiper leader Kalonzo Musyoka who is a co-principal in the National Super Alliance.

He said reports that he preferred co-principal Raila Odinga of ODM to Kalonzo were creations of the media.

“I have a very long political history with Kalonzo and he knows very well the battles I have fought for him. If what has been going around is true, by now Kalonzo would have expelled me from the

that in 2002, he tried to convince retired president Daniel Moi to leave the top seat to Kalonzo but did not succeed/

In 2007/8, he participated in the signing of the PNU deal that saw Kalonzo named Vice President and in 2013 he brokered the Raila-Kalonzo pact saying he realised former president Mwai Kibaki was not ready to support the Wiper boss.

Muthama noted that he has fought for Kalonzo since then, including in the ongoing NASA negotiations. He said the truth regarding where his loyalties lie will soon come out.

The Senator’s relocation to Nairobi may come as a big win for former Mwala MP John Katuku who has already declared interest in the Machakos senator seat.

Katuku, who served as Water and Irrigation Minister in the Kibaki government, will vie on his newly launched People’s Trust Party.

Political observers say that should Muthama Move to Nairobi, Katuku may opt to go for the seat under a Wiper ticket to increase his chances of winning.

Post a comment
WATCH: The latest videos from the Star
by By Andrew Mbuva. @andrewsmbuva
News
04 April 2017 - 09:00
Read The E-Paper