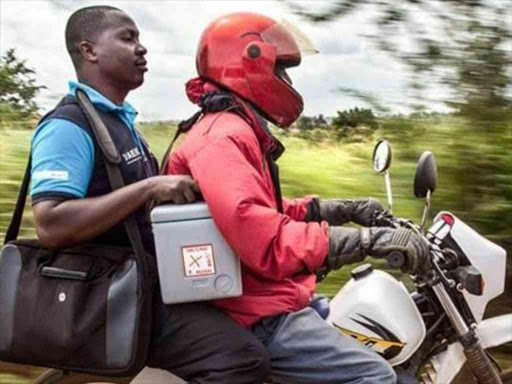 A health worker transports vaccines on a motorcycle. /FILE

Outdated vaccine supply and distribution systems are delaying and limiting the impact of vaccines, placing the health of millions of people at risk, according to new articles published in Vaccine journal.

The researchers note that one in every three countries in the world experiences at least one stockout of at least one vaccine for at least one month, while 19 to 38 per cent of vaccines worldwide are accidentally exposed to freezing temperatures, potentially compromising the potency of those vaccines.

The problem is most pronounced in sub-Saharan Africa, where 38 per cent of countries, possibly including Kenya, have experienced the stock-outs.

Rampant shortage of the BCG vaccine for tuberculosis was reported in Kenya in 2015 and 2016.

This was attributed to delays by manufacturers and procurement agencies rather than the country's distribution systems.

However, Kenya's vaccine supply chain is fragmented, with clinics and hospitals mostly organising their own collections.

“There are too many places in the world where vaccines are still not reaching the people who need them most,” says Steve Davis, head of the global health nonprofit Path, which coordinated the publication of the current special edition of the journal.

The articles identify challenges and point to solutions that countries can employ to modernise their immunisation supply chains.

A 2013 study in the Vaccine journal showed it costs an average Sh34 to deliver a single dose of vaccine Kenya, which is considered expensive.

However, Kenya's vaccine coverage is impressive with polio vaccine, for instance, reaching at least 93 per cent of the intended recipients in the last three years.

“We must act to close the global immunisation gap,” said Dr Matshidiso Moeti, WHO regional director for Africa. “Achieving the Global Vaccine Action Plan goal of universal access to immunisation by 2020 would benefit the health of millions of Africans.”

Immunisation supply chains—the network of staff, equipment, vehicles, and data needed to get vaccines safely from the manufacturer to the people who need them—were first developed in the late 1970s.

Since 2010, however, immunisation services have expanded with additional vaccines. Immunisation programmes are storing and transporting four times the volume of vaccines, according to WHO, and health care workers are administering up to six times as many doses per person, including to older children, adolescents, and adults.

"Too many children still lack access to lifesaving vaccines because of outdated and inefficient supply chains.” says Dr Seth Berkley, CEO of Gavi, the Vaccine Alliance. “Unless we drive change and deliver comprehensive improvements now, countries won’t have the systems in place to protect the next generation of children, particularly the most vulnerable.”

In Africa, the most affected vaccines are the diphtheria-tetanus-pertussis (DTP) as well as bacille Calmette-Guerin (BCG) for tuberculosis, which account for 43 per cent and 31 per cent, respectively, of stockout events reported.

Researchers from WHO and Unicef found that when a national-level stockout occurs, there is an 89 per cent probability that immunization delivery services will be compromised.