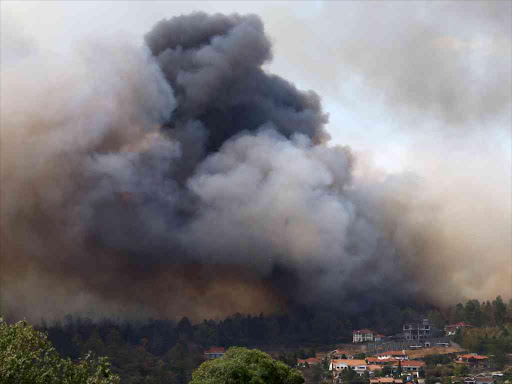 Smoke from a fire that has destroyed 50 hectares of Menengai Forest so far, March 11, 2017. /RITA DAMARY

A fierce fire that has burned for two days now has destroyed more than 50 hectares of Menengai Forest.

It started at about 3pm on Friday when it lasted about five hours and consumed 300 acres of vegetation. It started again at about 11am on Saturday.

and members of the public are trying to put out the fire whose cause is unknown.

Mutoro said it may have been caused by herders

grazing their livestock inside the forest.

“Investigations are underway to establish the cause but preliminary investigations indicate herders were there when the fire started,” he said.

The commandant it was difficult to stop the flames because of the dry weather and the hills and valleys in the forest which slow movement.

Mutoro said locals were afraid as the fire was spreading quickly and could reach homes at Milimani estate.

But he said their movements were being monitored and warned against burning waste and smoking in the forest, saying these were the leading causes of fires.

Residents accused the county of failing to respond on time, saying they arrived three hours after the fire started.

“The forest burns every year whenever we have drought but this time round, it is worse and we fear it might destroy our property," said

Mercy Muthoni. "We have been forced to monitor our children to ensure they are safe."

County environment executive Richard Rop said arsonists may have been behind the incident.

In March 2015, a fire destroyed more than 300 acres of vegetation at Menengai Crater.