Kenyans abroad sue IEBC for being locked out of voter listing 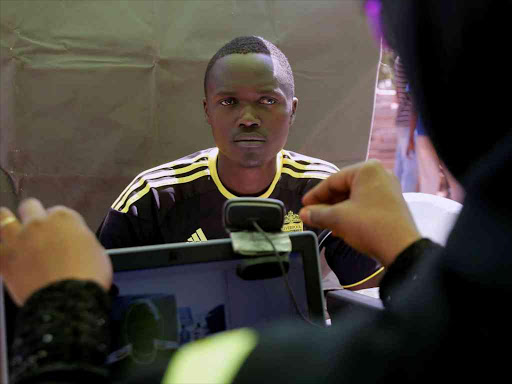 A man looks into the camera as an IEBC official collects data during the launch of the 2017 general election voter registration exercise in Kibera slums, Nairobi, January 16, 2017. /REUTERS

August poll in what may put more roadblocks on crowded timelines.

The Kenya Diaspora Alliance moved to court on

to compel the electoral body to list them as voters. This will pave way for the first case of voting from the diaspora.

The initial voter listing that had been planned for Kenyans across the world was cancelled at the 11th hour by the new IEBC team led by Wafula Chebukati.

The exercise in Uganda, Tanzania, Rwanda and Burundi officially came to an end on

KDA global chairman Shem Ochuodho told the Star they were also pushing contempt proceedings against the IEBC for deliberately failing to implement a Supreme Court directive.

diaspora to register and vote.

many Kenyans, even in the EA countries, were disenfranchised because the IEBC made it mandatory for applicants to have valid passports.

A passport is not a requirement for travelling to some of the EAC countries.

Ochuodho said every member of the public who went to register using an ID was turned away and asked to return with a passport.

“The diaspora went to court for contempt and to compel IEBC to respect and implement Supreme Court decisions,” he said.

The High Court has set a hearing for March 21 but KDA wants an earlier date.

“We are working on an appeal and ask that the matter be heard urgently,” he said.

whether they want Kenyans abroad to vote.

“We are also taking the battle to the doorstep of the President," said Ochuodho.

"Whenever he has been abroad, he has told diaspora 'you are my 48th county...you are my richest county...my government cannot ignore you. We are not seeing this now.”