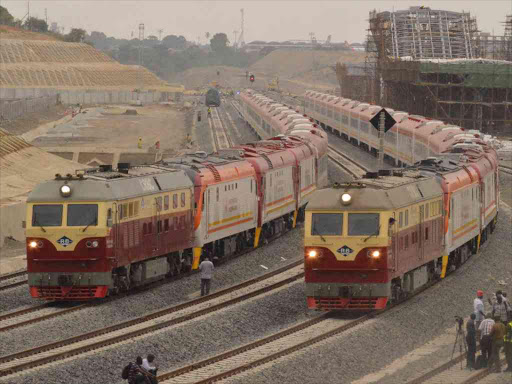 Another batch of 150 wagons for the Standard Gauge Railway were received by the KRC at the Port of Mombasa on Sunday.

The NX70 flat wagons will be used for freight transportation after the launch scheduled for June 1.

The 25-tonne axle flat wagons are suited for operations on the 1435mm SGR line, can carry a payload of 70 tonnes and are designed to run at 120 km/h, according to KRC.

Managing director Atanas Maina said they are used for general transportation purposes and will be used to move all types of containers.

The wagons will also be used to transport large size cargo such as steel, automobiles, tractors and box-cargo, Maina in a statement to media houses on Tuesday.

“The demand for transportation in the country today exceeds the capacity of the roads and existing railway lines. These flat wagons will provide a working solution for the transportation of freight and will go a long way in decongesting the port,” he said.

“Once we commence operations, railway transport will increase its market share of the total freight and cargo transport in the country.”

This will translate to less wear and tear on Kenya's roads and significantly contribute to growth in the Gross Domestic Product.

KRC has so far received eight freight haulage heavy-duty locomotives, out of the expected 43,

for mainline use. Two out of eight shunting locomotives were also received.

Two passenger locomotives and 32 passenger coaches are also in the country.

Three more passenger locomotives and eight passenger coaches will be received by May to complete the order.

Post a comment
WATCH: The latest videos from the Star
by CHARLES MGHENYI, @CharlesMghenyi
News
07 March 2017 - 12:00
Read The E-Paper