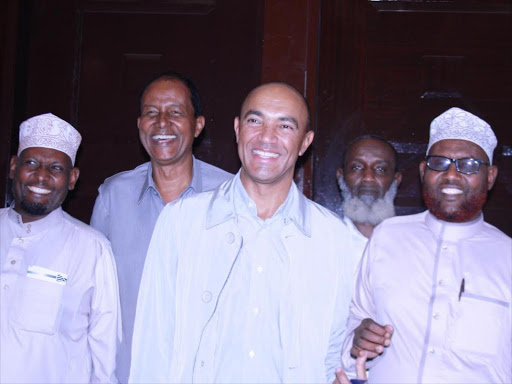 The Jubilee governor aspirant said he and Sonko are not in the same competition.

"A lot of times we get provoked and people say 'Why don't you respond? Why don't you react?' And I keep saying, if we react to foolish acts people will not notice the difference. We will confuse the fraternity more," Kenneth said.

"We are different. I offer leadership, he offers hooliganism; I offer a way forward, what he offers is cheerleading to groups of gangs and encouraging gangs.

Kenneth spoke at Crowne Plaza Hotel during a meeting with National Muslims' Leaders' Forum on Saturday.

The former Gatanga MP said people should stop considering political differences between him and Sonko as internal strife in Jubilee party.

"I do not consider it an internal strife. I offered my candidature ... and I think it is very clear amongst us in Jubilee, which candidate offers the best solution and that is the candidate for Jubilee in Nairobi," Kenneth said.

He said Jubilee is a very democratic party and once they go through nominations, they will finish the matter once and for all.

"I am confident we will banish him from the politics if we go that way so it is up for him," he added.

Kenneth said the Dagoretti incident where Sonko and his supporters disrupted a football match is an example of the Senator's bad leadership.

"So if people come and disrupt a football match, it is not for us to do the same; it is for us to see them off and the football match to resume so we can see the end of the game," he added.

He noted that his only opponent is the incumbent Evans Kidero, whom he accused of running the city to its knees.

Kenneth said Kidero has disappointed many who elected him on account of his managerial experience.

"Unfortunately four years later, he has not shown anything of what he had. My fear is

that if we let Nairobi to go on the way it is, we will have another Mumias case where everything is camouflaged and the minute he leaves it starts sinking," Kenneth said.

Kenneth said Kidero is perfect example of who should not be elected a governor and Nairobi voters should redeem themselves from failed leadership.