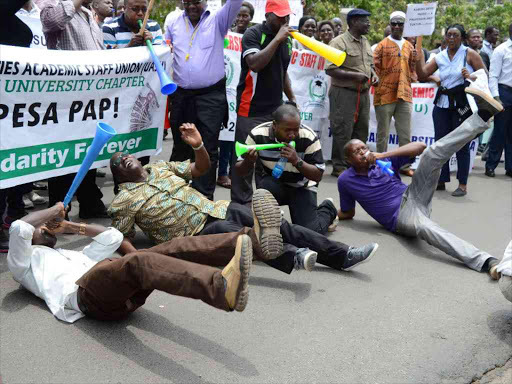 Lectures have said they will only call off their strike if the state confirms that the Sh4.8 billion offered to them is on top of the initial Sh10 billion.

UASU secretary general Constantine Wasonga said they will analyse the amount awarded by Parliament before making a decision to accept it or not.

The Budget and Appropriation Committee allocated the money in a supplementary budget tabled before the August House on February 23.

Lecturers, who for the state to honour their 2013-17 CBA, were Sh4.8 billion to persuade them to return to work.

But Wasonga said they first need an assurance from the Ministry of Education if the offer now stands at Sh14.8 billion before making any decision.

"Once we are assured that the Sh4.8 billion is added to the initial offer of Sh10 billion, we will sit as the national executive council to see what to do," Wasonga said.

Wasonga said the union has formally written to CS Fred Matiang'i and Higher Education PS Collette Suda to seek clarification on the matter.

"They are yet to respond. It is worth noting that no government agency is engaging us in talks to resolve the strike stalemate," the UASU boss said.

Matiang'i earlier said that the talks fall within the jurisdiction of the Inter-Public Universities Consultative Council Forum (IPUCCF).

"Let us not talk about calling off our strike. It is our weapon. We must, first of all, get the impact of this Sh4.8 billion," Wasonga said

"The ultimate goal of the strike is to ensure the 2013-2017 CBA is negotiated, signed, registered and implemented in full," he added.

UASU officials were on Tuesday invited by the Senate Committee on Education to shed light on why they rejected the Sh10 billion offer.

"Unless the situation is remedied, there is an impending collapse of higher education sector in Kenya," Wasonga told the committee.

He said the Sh10 billion is not enough to cater for the needs of the 30,312 members of all three unions namely Uasu, Kusu and Kudheia.

Post a comment
WATCH: The latest videos from the Star
by EMMANUEL WANJALA @imanovichrambu
News
03 March 2017 - 18:00
Read The E-Paper