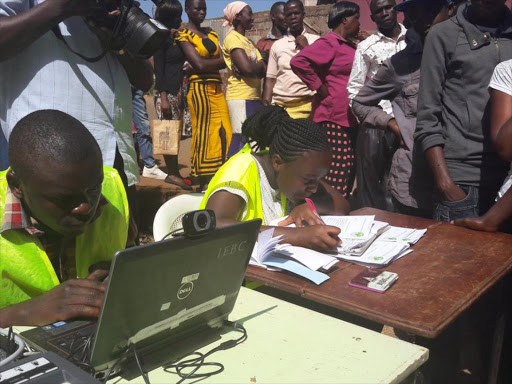 Kenyans wait to register as voters following the launch of the IEBC's second phase of the exercise, January 16, 2017. /COURTESY

The verification will be done by confirming biometric data of voters at the polling stations between May 10 and June 10. Masudi said the audit of the voter register has not been done within the timelines due to a conflict between section laws with the Public Procurement and Disposal Act.

“The commission had identified a firm to undertake the audit following an expression of interest which was floated,” he said. The contract has not been signed owing to a court order stopping the process,” Masudi said.

“The commission is hopeful that the matter can be resolved expeditiously to enable the commencement of the audit.”

The review is expected to shed off names of dead people who “resurrect on the voting day, vote and return to their graves.” Masudi spoke at Laico Regency Hotel in Nairobi during a meeting organised by the Kenya Alliance of Residents Associations. He said the key activities the commission is keen on in the preparations for the August 8 general election include the massive voter registration, which ends today, and audit of the register.

Others include nomination of candidates by parties, deployment of election technology, results management, voter education and stakeholders meetings.

The IEBC was targeting to enroll six million additional voters in the mass registration, however, the campaign is likely to achieve half of the projected figure due to unprecedented voter apathy.

Masudi said many youth are not interested in registering as voters and the elections because of disappointments from politicians.