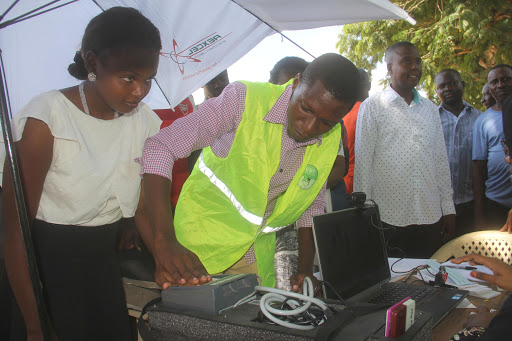 Members of the public are registered as voters in Mombasa, January 17, 2017. /ELKANA JACOB

Former Sabaot Land Defence Force fighters are shying away from registering as voters in Mt.Elgon, saying them to law enforcers.

Deputy county commissioner Stephen Momanyi said on Tuesday that most of them had been hiding from the government due to their past criminal activities.

“We have a serious problem. Many youths who escaped arrest during the joint military and police operation dubbed Operation Okoa Maisha fear this could be an easy way for them to be arrested,” he said.

dispelled rumours by some politicians that the government was seeking

to have the former fighters arrested once their

“I am calling on the youths to register because there is nothing linking their past criminal record to the voter registration,” he said.

The administrator added that the constitution also allows those in prison to vote.

SLDF leader Wycliffe Matwakei was shot dead by the joint forces in 2009 alongside most of his top commanders.

But another wing led by former GSU recce officer Sichei Chemamaik escaped arrest and has slowly been trooping back since peace was restored.

Post a comment
WATCH: The latest videos from the Star
by JOHN NALIANYA @jonaliash
News
07 February 2017 - 12:00
Read The E-Paper