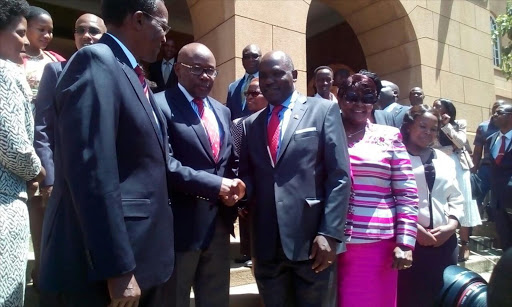 New IEBC chairman Wafula Chebukati greets AG Githu Muigai after he and his team of six commissioners were sworn in by Chief Justice David Maraga (left) at the Supreme Court, January 20, 2017. /COURTESY

Wafula Chebukati and his team of six commissioners have been sworn in to head the electoral commission.

"I pledge to serve with integrity and without discrimination.

I accept my appointment with humility and gratitude," he said.

IEBC will be impartial and work with all stakeholders to ensure free and fair elections on August 8.

"Fellow Kenyans, your vote counts. Your vote at the ballot can change things.

To all of you who sent me good will messages, I say thank you very much. I am here to serve my country," he said.

The new chairman said the members of this team have

special skills that will enable them handle all matters with integrity.

"Those with issues, please come to us and to

politicians, Carry the message of peace to the electorate," said Chebukati.

The team took oath of office at the Supreme Court on Friday, led by by Chief Justice David Maraga.

The seven form the new team replacing Issack Hassan and his team of commissioners who resigned in October last year.

The President earlier met the outgoing officials and thanked them for their service to the nation.